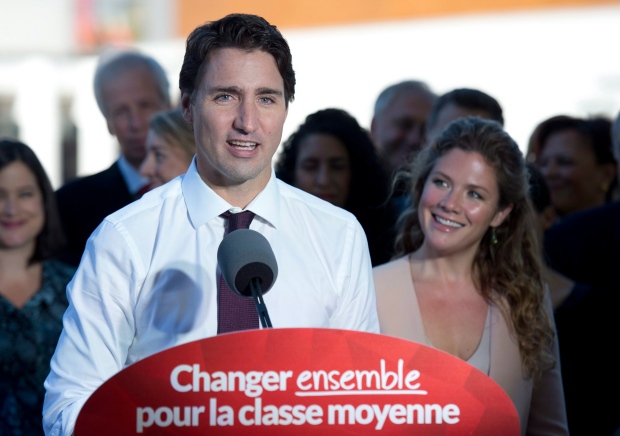 Sophie Gregoire smiles as she listens to her husband Liberal Leader Justin Trudeau speak during a campaign stop in Montreal, Tuesday, September 22, 2015. THE CANADIAN PRESS/Adrian Wyld

MONTREAL -- The Liberals would give $380 million in additional funding for the arts and undo the Conservative funding cuts to the CBC, Justin Trudeau announced Tuesday.

Trudeau said he would reverse the $115 million in cuts the Conservative government made to the national broadcaster annually for three years and top up funding for CBC/Radio-Canada by an additional $35 million per year.

The Liberal leader also said he would double the annual funding for the Canada Council of the Arts from $180 million to $360 million.

Telefilm Canada and the National Film Board would together get an additional $25 million per year, he said, surrounded by supporters and local candidates at a Montreal hotel.

He held his arts announcement in Quebec, a province with strong ties to its artistic communities.