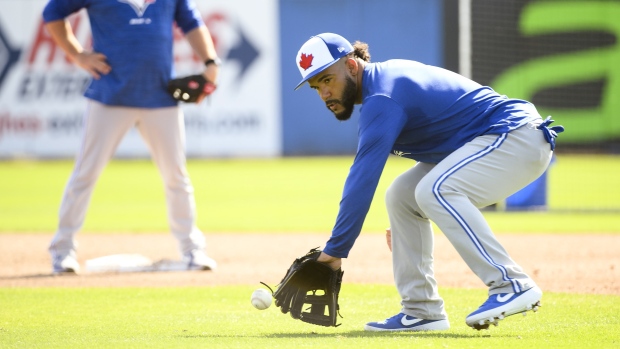 Toronto Blue Jays infielder Devon Travis takes part in a drill during baseball spring training in Dunedin, Fla., on February 16, 2019. Former Toronto Blue Jays second baseman Devon Travis has declined his assignment to triple-A Buffalo and elected to become a free agent. Injuries have troubled Travis for years. He has been out of the big leagues since 2018 when he played a career-high 103 games. THE CANADIAN PRESS/Nathan Denette

Injuries have troubled Travis for years. He has been out of the big leagues since 2018 when he played a career-high 103 games.

Travis missed the entire 2019 season after undergoing surgery on his left knee.

The native of Palm Beach., Fla., played 50 games in 2017 before suffering a season-ending right knee injury.

Acquired in a trade with the Detroit Tigers in 2014, Travis made his major-league debut the following season and became just the fourth player in Blue Jays history to hit a home run in his first career game.

Travis has a career average of .274 with 35 home runs and 153 RBIs over four seasons with Toronto.

“I look forward to what is in store for me, but I will always miss putting on that Blue Jays uniform and representing such a beautiful country,” Travis wrote.