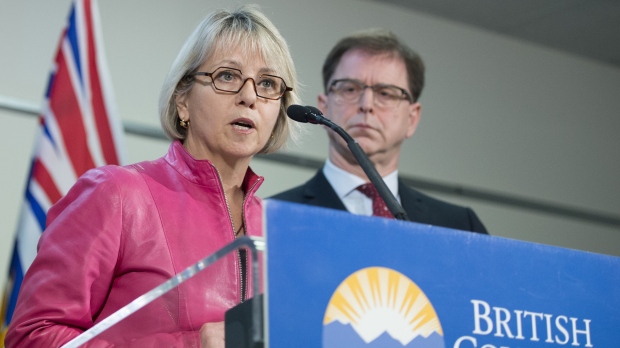 VANCOUVER - A fifth case of the novel coronavirus has been presumptively confirmed in British Columbia, bringing the total number of cases in Canada to eight.

Provincial health officer Dr. Bonnie Henry said Friday a woman in her 30s returned from Shanghai, China, in the past week through Vancouver's airport before travelling by car to her home in the Interior health region.

Henry said the woman wore a mask on the plane and contacted health officials when she had symptoms of an illness before being tested positive Tuesday for the virus that the World Health Organization has named COVID-19.

“We are very grateful and thankful that the people who are coming back from Hubei province and all over China are taking the advice seriously to self monitor and to connect with us and make sure that they can be tested, assessed and cared for safely,” she said.

The woman is in isolation at home, as are her close contacts, Henry said, adding that in all cases a further test will be conducted at a national lab in Winnipeg to confirm the results obtained provincially.

Officials will be contacting passengers who sat three rows ahead and behind the woman on the aircraft that arrived from China but the risk to them is “very, very low,” she said.

The first person to be tested for the virus in the province is recovering well and has tested negative in the first of two tests that would indicate the virus no longer exists and isolation is no longer required, she said.

Henry said 715 tests have been done on about 500 people returning from China based on a low threshold for testing of the virus that originated in Hubei province.

Three cases of the virus have also been confirmed in Ontario.