Finger found in alley was a fake used in zombie flick 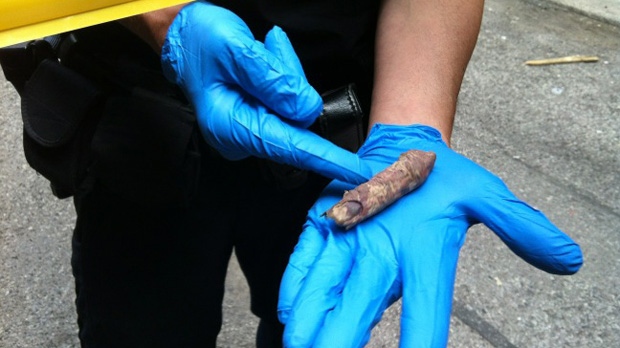 A Toronto police officer holds a fake finger that was found in a downtown alley Monday, Aug. 13, 2012. (CTV/Tamara Cherry)

Toronto police sealed off a downtown alley after someone thought they made a grisly discovery Monday afternoon.

It turns out the mangled-looking and apparently severed finger found in the lane was a forgotten or discarded movie prop.

The fake finger was used as a prop in a zombie film, police spokeswoman Const. Wendy Drummond told CP24.

The digit was found by an alarmed passerby in an alley near Front Street West and University Avenue at about 1 p.m.

Toronto police officers investigate after a finger was found in a downtown alley Monday, Aug. 13, 2012. It turns out the finger was a fake that was used as a prop in a zombie film. (CTV/Tamara Cherry)