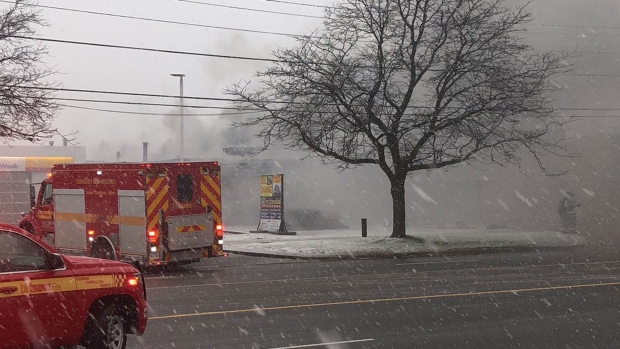 Smoke is visible as fire crews arrive at a two-alarm fire at an auto garage on Markham Road Friday December 4, 3030. (Submitted)

No injuries were reported after firefighters put out a two-alarm blaze at an auto shop in Scarborough Friday where they encountered a number of small exploding containers.

The fire broke out at a garage on Markham Road, just north of Lawrence Avenue East, at around 9:45 a.m.

Toronto Fire said crews encountered smoke and flames when they arrived, as well as small explosions from tires and popping containers.

Firefighters managed to put out the blaze using foam. They also tried to block off the sewers to prevent volatile liquids such as gas, diesel and oil from seeping into the water system.

The Ministry of the Environment has been notified of the fire because of the potential hazardous materials that may have escaped the site.