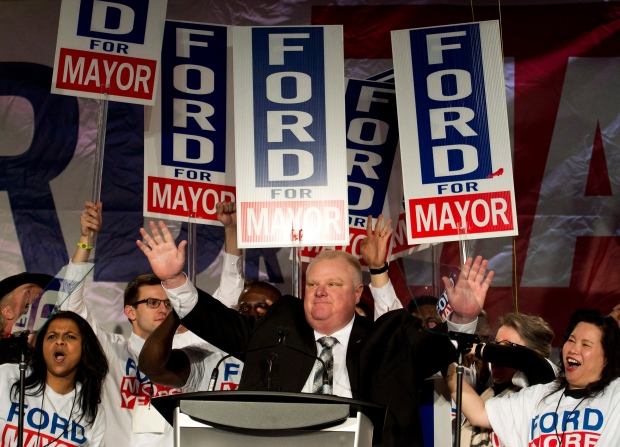 Toronto Mayor Rob Ford reacts as he speaks to his supporters during his campaign launch in Toronto on Thursday, April 17, 2014. (The Canadian Press/Nathan Denette)

In a letter released Tuesday, Mayor Rob Ford accepted a ‘friendly wager’ issued by Brooklyn Borough President Eric Adams on the NBA playoff series between the Raptors and the Nets.

“I feel it is extremely important for people in all cities to be involved in sports, be it school and extra-curricular programs for our youth, staying active as an adult, or cheering on our local teams throughout their seasons,” the letter from Ford’s camp reads.

“I would be happy to take you up on your offer of a friendly wager, with the winner receiving a CD of a favourite local artist.”

Over the weekend, Adams issued a press release following Raptors general manager Masai Ujiri’s comments ahead of Game 1 of the series when he yelled “F--- Brooklyn” to fans gathered at Maple Leafs Square Saturday.

“It’s unfortunate that the Raptors’ GM felt so desperate facing against our Nets that he would throw profanity around discussing our beloved borough, but I can’t say I’m surprised,” the statement said.

“After all, Brooklyn is a classier place. Just compare Babs (Barbara Streisand) to Biebs or spend some time with their… colourful mayor.”

The statement goes on to suggest a friendly wager rather than a war of words.

“I’m willing to send up north some of Brooklyn’s best if the Raptors can prevail, perhaps a six pack from Brooklyn Brewery or a CD from Brooklyn’s first family of hip hop.”

In a Toronto Sun article Monday, Ford joked that while the beer bet might make for better media headlines, he didn’t want to take the spotlight off the series itself.

Ford confirmed in his statement that he will be attendance at Tuesday night’s game - while also getting in a final barb at Adams.

“Best wishes to both teams,” it reads. “I’ll be there tonight to watch the Raptors tie the series.”