Ford continues war of words with union leader, says he'd rather listen to doctors than 'some guy with a degree in English literature' 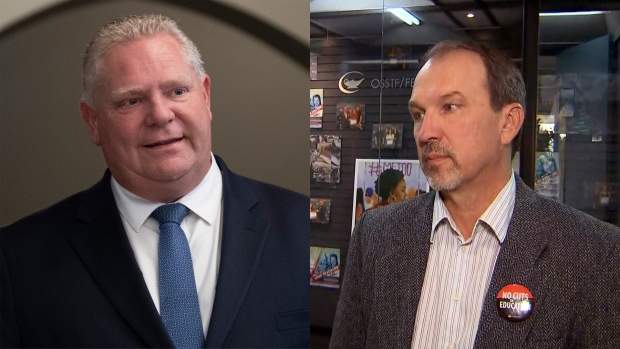 Premier Doug Ford is ratcheting up his war of words with the head of one of Ontario’s largest teacher unions, telling reporters that he would rather listen to doctors and epidemiologists than someone “with a degree in English literature who thinks he is a doctor.”

Ford has been engaged in a prolonged dispute with the leaders of Ontario’s four teacher unions over his government’s back-to-school plans.

The unions have said that the plans fail to institute specific standards “around physical distancing, cohorting, ventilation, and transportation” and have vowed to file formal appeals with the labour relations board over what they say is a violation of the Occupational Health and Safety Act.

Ford, meanwhile, has accused the unions of being unreasonable and has said that his “patience is running thin” with their rhetoric.

Speaking with reporters during his daily COVID-19 briefing on Wednesday, Ford took his criticism one step further, singling out Ontario Secondary School Teachers' Federation President Harvey Bischof, who earlier this week brought up his own academic background in an interview with an Ottawa radio station.

“I will listen to the docs and the health and science all day long as opposed to some head of the teacher’s union that has his degree in English literature as Harvey does,” Ford said. “I think the parents would rather us listen to the doctors as opposed to some guy with a degree in English literature who thinks he is a doctor.”

Bischof, who has an English literature degree from Trent University as well as a Masters of Arts and Bachelor of Education degree from Queen’s University, has been outspoken about the government’s return to school plans in the past and last week took to Twitter to accuse Ford of “belittling educators.”

He has also stressed that teachers only want the same safeguards as other frontline workers, such as a minimum of two metres of physical distancing in the classroom.

In a statement posted to Twitter following Ford’s remarks, Bischof made it clear that he has only ever raised his academic credentials to support the fact that he is not an epidemiologists and is deferring to the experts to evaluate Ontario’s back-to-school plans.

Those experts, he said, have made clear that the plan falls short in failing to introduce lower class sizes across the board.

“To be clear, I cited my academic background as the reason I listen to the medical experts rather than substitute my own judgement,” Bischof said. “When the SickKids report says we should limit class sizes as the ‘priority strategy’ for a safe return, I’d prefer that the premier not substitute his own judgement for theirs either.

The Ford government has allowed school boards to dip into their reserve funds to hire additional teachers and reduce class sizes but many boards, including the TDSB, have said that it will still be impossible to guarantee two metres of physical distancing in its classrooms.

During his briefing on Wednesday, Ford called Ontario’s return to school plan the “safest” in Canada and again accused the unions of “playing politics” and “painting a picture of apocalypse.”

In a statement released on Wednesday afternoon, the Ontario Green Party took issue with Ford’s latest criticism of union leaders and said that the premier is hoping “that by dividing he can conquer the very educational workers that are putting themselves in harm's way to head back into Ontario classes.”

“Instead of hurling insults, the Premier should focus on providing the resources needed for smaller class sizes,” the statement reads.