Ford declares state of emergency, orders closure of some businesses

Premier Doug Ford has declared a provincial state of emergency in response to a worsening COVID-19 outbreak and will now order the closure of restaurants and bars not providing takeout service along with a host of other venues where crowds are known to gather.

Ford made the announcement at a hastily-called news conference at Queen’s Park on Tuesday morning, noting that the province is facing an “unprecedented time in its history” and must “act decisively” and “take any and all actions necessary as COVID-19 continues to spread.”

He says that under the order the government will prohibit all organized public events of more than 50 people until March 31, including services in places of worship. He said that the order will also force the closure of all facilities providing indoor recreational programs, all public libraries and private schools, all licenced childcare centres, all bars and restaurants that don’t provide takeout services and all theatres, cinemas and concert venues.

On Monday, the City of Toronto had recommended that bars and restaurants halt dine-in service in light of indications that COVID-19 was spreading in the community, though the order from the province will now make that mandatory for businesses across the province.

Ford said that police officers could even be used to shut down non-compliant business, though he said that he doubts that will be necessary. He also pointed out that some business owners may be able to have losses covered by insurance policies now that their closure is mandatory.

“Right now we have to do everything possible to slow the spread of COVID-19 in order to avoid overwhelming our healthcare system,” Ford said. “We must think about our children, our parents and our grandparents. We must think about the elderly, those with health issues and every other person across this province. All of these people have been on my heart and on my mind with every decision I have made during this crisis.”

Ford said that the decision to declare a state of emergency was made on the basis of advice from Ontario’s Chief Medical Officer of Health Dr. David Williams but nonetheless was “not taken lightly” and was debated “late into the night and again early this morning” by his cabinet.

Ultimately, he said that a decision was made that the extraordinary measures could help the province “get ahead of the curve and slow down the spread of the virus.”

“We are taking the steps necessary to protect you and your loved ones, we are taking these measures now while our system is strong and to ensure that it remains strong in the days and months ahead,” Ford said. “I want to urge calm across the province. No expense will be spared to support Ontarians in need. There is no level of support we won’t consider.”

By declaring a state of emergency, the province would have the power to issue orders that prohibit travel or movement, as has been done in other countries, including Italy.

Ford, however, said that we “are not at that stage” at the moment.

He also stressed that order will not force the closure of essential businesses.

“This is not a provincial shutdown. I repeat this is not a provincial shutdown,” Ford said. “The vast majority of businesses including those vital to day to day life will not be affected by this order. Essential services will be available to every individual and family. Groceries, convenience stores, pharmacies, manufacturing facilities, public transit, construction sites and office buildings will all continue to operate.” 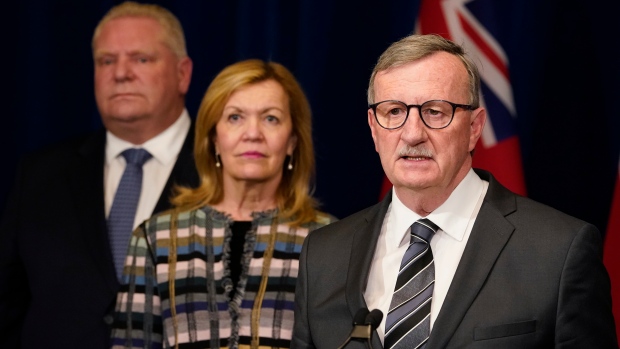 As COVID-19 continues to spread, now with widespread reports of community transmission, the Ford government is also investing an initial $304 million in is response to the global pandemic.

Ford said that the money would, among other things, help the province add 75 more critical beds to its hospitals and 500 new post-acute care beds. It will also allow the province to open up an additional 25 dedicated COVID-19 assessment centres, on top of the six opened last week.

“We listen to the frontline workers and this surge funding will back them up in the fight against COVID-19,” Ford promised, noting that it was the first stage of a “larger emergency relief package.”

Tory says order will help protect all cities, including Toronto

Ford’s comments on Tuesday represent a slight pivot from the day prior when he said that the province was deferring to Ontario’s Chief Medical Officer of Health, who hadn’t yet made any recommendation to close restaurants, bars and other businesses.

At the time, he said that “once the chief medical officer tells us we need to shut it down, we will shut it down.”

In a statement issued following Ford’s announcement on Tuesday, Mayor John Tory applauded him for the move, noting that it will “help all cities, including Toronto, protect the health of our residents and further prevent the spread of COVID-19.”

“I hope the seriousness of this declaration will make it clear to every resident how important their personal actions will be in the coming days. If people can stay home then stay home and limit your interactions with other people,” he said. “We know from our medical professionals that engaging in social distancing will protect people's health and the health of their family and their neighbours.”

Prime Minister Justin Trudeau also commented on Ford's decision to declare a state of emergency on Tuesday, telling reporters outside Rideau Cottage that it is the "right step to protect people and the healthcare system."

Today, Ontario announced it was declaring a province-wide State of Emergency as part of the ongoing response to #COVID19. This declaration will help the province & all cities, including Toronto, protect the health of our residents & further prevent the spread of COVID-19. pic.twitter.com/9rvLpmN36r

Ontario Premier Doug Ford makes an announcement declaring a state of emergency for the province, at the Ontario Legislature in Toronto on Tuesday, March 17, 2020. THE CANADIAN PRESS/Frank Gunn