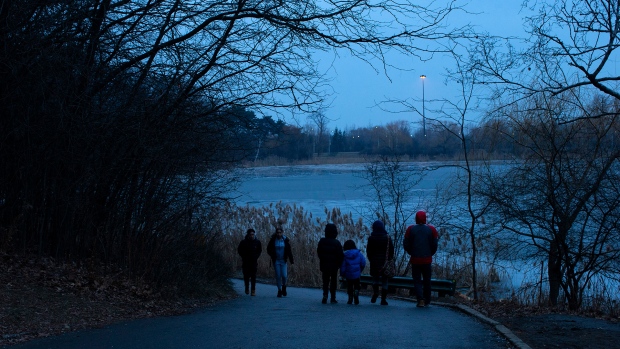 Passers-by walk in High Park, in Toronto, Thursday, Jan. 14, 2021. Thursday marks the first day of the Ontario govenment's emergency stay at home order, issued as a response to the increased spread of COVID-19. THE CANADIAN PRESS/Chris Young

The Ford government has extended its second state of emergency and a stay at home order due to coronavirus for an additional two weeks.

Included as a line in a news release about the vaccine program, the province says both the state of emergency and the stay-at-home order will now extend until at least Feb. 9.

The Stay at Home order originally declared on Jan. 12 requires Ontario residents to stay in their homes unless they are going out for approximately 33 different approved purposes including all forms of air, rail or bus travel, exercise or medical reasons.

The order limits outdoor gatherings throughout the province to five people, restricts people from having guests in their homes and requires all workers not deemed essential by their employer to remain at home.

The extension of the state of emergency also extends the temporary pause on residential evictions and maintains all penalties in place for violating the order.

Ontario’s state of emergency was declared under the provincial Emergency Management and Civil Protection Act (EMCPA) on Jan. 12, and the stay-at-home order was to expire on Feb. 9.

The extension was expected after Premier Doug Ford said on Jan. 12 the state of emergency would be in effect for at least 28 days.

A state of emergency in Ontario must be legally extended by cabinet two weeks after it comes into effect.