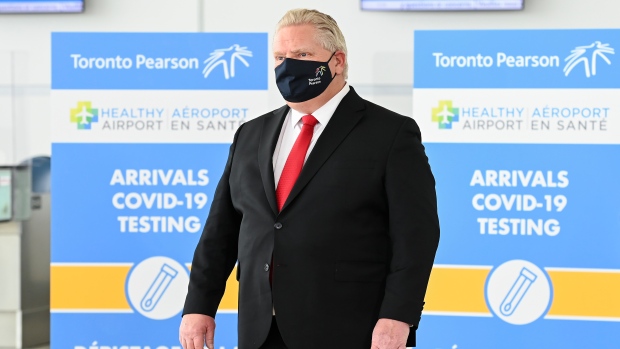 Premier Doug Ford says that there could be an announcement next week regarding the eventual reopening of the economy.

Ford made the comment as he toured a new COVID-19 testing facility at Pearson International Airport on Wednesday afternoon.

It comes on the heels of Quebec Premier Francois Legault announcing that non-essential stores, personal care salons and museums across the province will be permitted to reopen next week.

A number of business in Alberta were also permitted to reopen last month amid declining case counts and hospitalization numbers in that province.

“We're gonna be going to cabinet this afternoon, we'll have a better idea after our cabinet meeting, and we'll have an announcement, probably on Monday,” Ford said. “So our goal is to open up the economy safely and only a couple of hot zones might be a week later.”

A provincewide lockdown went into effect on Boxing Day, forcing a wide swath of businesses to close.

The Ford government then issued a second state of emergency and stay-at-home order on Jan. 12 as case counts continued to surge.

Both of those orders are set to expire next week and at this point it remains unclear whether they will be extended.

Speaking with reporters, Ford said that he wants to get the economy “opening up” especially in some “northern rural areas” where transmission has been lower.

But he said that safety remains “the number one priority.”

It should also be noted that some epidemiologists advising the province have also expressed concern about reopening the economy prematurely while a number of new COVID variants are circulating.

“It is those jurisdictions that have maintained their public health measures while they have been coping with this new variant that have actually had some success and I worry a little bit about relaxing them as the prevalence of the new variant increases. It could really lead to an almost vertical like takeoff in terms of the number of cases with doubling time really shrinking down,” Dr. Adalsteinn Brown, co-chair of the province’s COVID-19 science table, told reporters last week. “So I think in any place where we have a concern that cases take off you maintain the public health measures but by doing that we may be able to get kids back to school.”

A spokesperson for the premier’s office did tell CP24 following Ford’s remarks that “no announcement has been scheduled yet regarding the re-opening of the economy.”