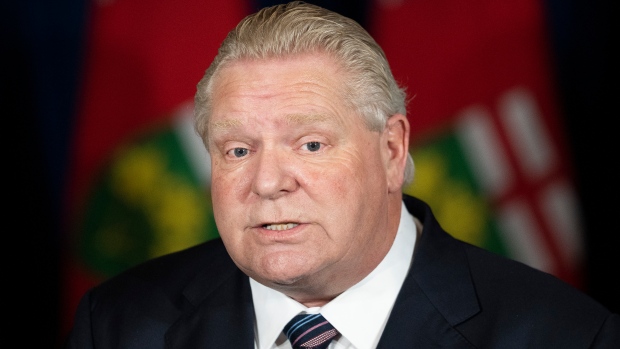 FILE - Ontario Premier Doug Ford holds a press conference at Queen’s Park regarding the easing of restrictions during the COVID-19 pandemic in Toronto on Thursday, January 20, 2022. THE CANADIAN PRESS/Nathan Denette

Practitioners said they were shocked by the proposal because they had not been calling for it, nor were they consulted.

But Ford said he heard "broadly" from the Chinese community that the system needed to change.

"There was a tremendous amount of people that were prevented from being a practitioner because they had a language barrier," he said.

"If they spoke Cantonese or Mandarin they were out of luck."

Contained in recently tabled labour legislation is a section that would wind up the College of Traditional Chinese Medicine Practitioners and Acupuncturists of Ontario, the profession's regulatory body that was established in 2013.

A spokeswoman for Health Minister Christine Elliott has said the proposed legislation would see oversight transition to the Health and Supportive Care Providers Oversight Authority, though registration with the authority would be on a voluntary basis.

The premier said he won't change anything until the government consults further.

Heather Kenny, the president of Traditional Chinese Medicine Ontario, said she looks forward to consultation because the legislation came as a shock.

"It would seem that a barrier to working in this profession such as language could be adequately overcome through effective communication between the government and the college," she said.

Mary Xiumei Wu, the president of the Toronto School of Traditional Chinese Medicine, said she was part of the fight to get the profession regulated in the first place. She said it ensured that clients could have confidence in their practitioners and more people could access the treatments because insurance covered them.

"(Deregulation) will downgrade the practice of traditional Chinese medicine to the levels like doing tattoos and ear piercing," she said in a statement.

"This is not (only) disrespectful but discriminates against 3,000-year-old medicine and a formal traditional Chinese medical profession ... Anybody could hang up a shingle, put needles into people, and prescribe herbal medicine. This will put the public at high risk of physical, mental, and spiritual injuries."

When the regulation was first introduced, some practitioners said it would prevent people from working as traditional Chinese medicine practitioners if they had learned it from their elders instead of in a school setting, or if they spoke insufficient English.

"I don't have people sending me emails or people coming to me and saying to me, 'you need to make this change,'" he said.

"What I think is, somebody has wanted this change for a long time and they got to somebody in government. I don't know whether it's the premier, the minister's office - there's no other discernible reason for the change. There is no improvement to patient safety. It's the absolute wrong thing to do for people."

Traditional Chinese medicine is an ancient treatment that focuses on acupuncture, herbal remedies, proper nutrition and Chinese massage to balance the yin and yang – or contrary forces – in one's system.

This report by The Canadian Press was first published March 3, 2022.