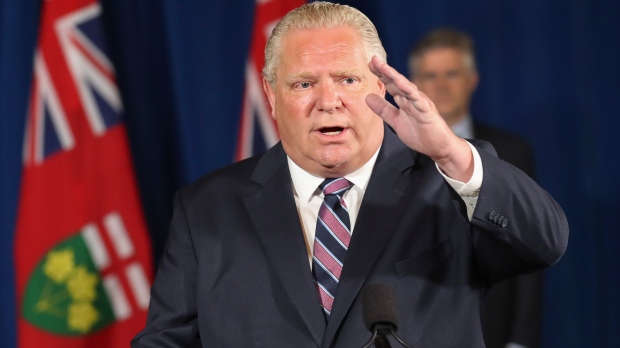 Premier Doug Ford says that the province will again take a “staged approach” when it comes time to move to the next phase of Ontario’s reopening plan.

Ford had initially rejected the idea of lifting restrictions on a regional basis but ultimately elected to do so at the request of the medical officers of health from all 34 of Ontario’s public health units.

As a result, the GTHA and the Windsor-Essex area were both held back from advancing to stage two with the rest of the province on June 11. Those regions were, however, eventually allowed to move to stage two after seeing a decline in new COVID-19 cases.

Right now, the only places in Ontario still stuck in stage one are two agricultural towns in southwestern Ontario, where there have been significant outbreaks among migrant workers.

Speaking during his daily briefing at Queen’s Park on Friday, Ford said that he expects to use the same region-by-region approach when it comes time to move to the final stage of Ontario’s three stage reopening plan.

That stage is expected to include the lifting of more restrictions of public gatherings and the reopening of more workplaces.

“We are going to rely on all of the medical officers of health, all 34 of them from across the province, and I am sure that we will be doing the same staged approach,” he said. “I can’t give you the exact time but the minister (Health Minister Christine Elliott) and I want to move this forward. We are only going to move it forward based on health and science and making sure we are very cautious, though.”

The province’s initial framework for reopening called for a two-to-four week period between each phase so that officials could monitor for any uptick in cases.

While it has now been two weeks since 24 of Ontario’s public health units entered stage two, it has only been two days since Toronto and Peel Region did, suggesting that a continued regional rollout may make some sense.

Ford said that in deciding when to move on to stage three, the province will continue to take “a cautious approach” and won’t “go hog wild” like he said has been the case in some U.S. states that are now seeing higher levels of infections.

“If we continue moving forward with a very cautious approach we won’t see the same events that are happening down south of the border in the U.S. right now,” he said.

At this point it is unclear what will be entailed in stage three, though the province’s initial framework released in April said that “activities like concerts and sporting events will "continue to be restricted for the foreseeable future."