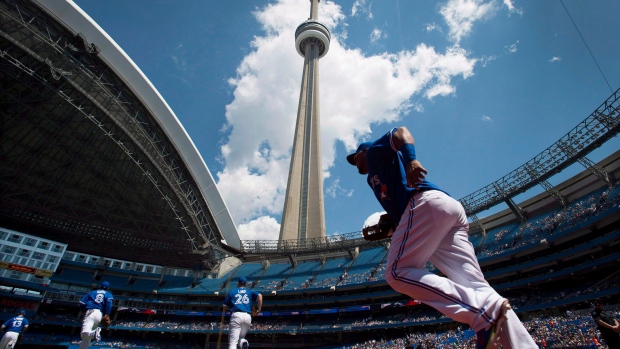 Members of the Toronto Blue Jays take to the field prior to MLB baseball action against the Oakland Athletics in Toronto on Saturday, May 24, 2014. (THE CANADIAN PRESS/Darren Calabrese)

While it didn't go as planned -- Reeves went 0 for 4 with a strikeout, Borucki allowed four runs over six innings, and the Dunedin Blue Jays lost 6-0 -- Reeves credited Borucki with making the game feel like a victory.

"That's the type of guy Ryan Borucki is," Reeves said from his hometown in Peterborough, Ont., hours before Borucki made his big league debut for Toronto on Tuesday night. "He knew it was my last game, it was kind of determined before the game that I was parting ways with baseball, and he made it special for me.

"He's a guy who always has a good feel for the clubhouse, for other guys' emotions and ups and downs, and it was one of those things where he said without saying: 'you know what? Let's go, one last time. Let's do this."'

Reeves, a 21st-round draft pick by Toronto in 2013, played five seasons in the Blue Jays' organization before retiring from pro ball last July.

He caught Borucki for the first time at low-A Vancouver in 2014 and at almost every level after that as the left-hander rose through the ranks.

Reeves said he wasn't surprised to hear Borucki had been called up for Tuesday's start against the Houston Astros. He texted his old battery mate when he heard, offering his congratulations and wishing him luck.

"It was just a matter of time before he got called up," Reeves said. "Once he started developing his slider last year, you saw how he climbed through the system -- A-ball, double-A, triple-A, it was amazing. He started learning how to throw his pitches, throwing them with meaning. He'd pick his spots, he learned how to throw that slider with two strikes and his change-up is his bread and butter.

"It's going to be exciting to see how he fares up there (in the majors) but pitching's pitching and I'm sure he'll do fine."

The 24-year-old Borucki was more than fine in his debut despite picking up a loss. He allowed two runs and six hits over a 95-pitch, six-inning performance against the defending World Series champions.

But there was a time he wasn't so solid.

Borucki and Reeves both opened the 2016 season in high-A Dunedin, where the pitcher struggled to a 14.40 earned-run average through six starts before getting sent down to single-A Lansing.

Reeves said that setback was an important part of Borucki's development.

"He went back down, made the adjustments and figured it out and then his numbers were ridiculous," he said. "Me and Danny Jansen (the Jays' current top catching prospect) were working with him, trying to get him through that and my part in that was guiding him away, showing low targets, putting different scenarios in his head and making him think like a big leaguer."

Borucki finished that year with a 4.18 ERA and lowered it further to 2.93 the following season over three minor league levels.

Now that Borucki has tasted the big leagues, Reeves said he expects his former teammate to enjoy more success there.

"When you watch these guys on TV, what makes them the best in the world is they have 100 per cent belief in themselves," Reeves said. "When (Borucki) was sent down, he continued to believe he could do it. And he kept pushing and pushing and he got there.

"Guys in the big leagues do that. That's why he's with them now."