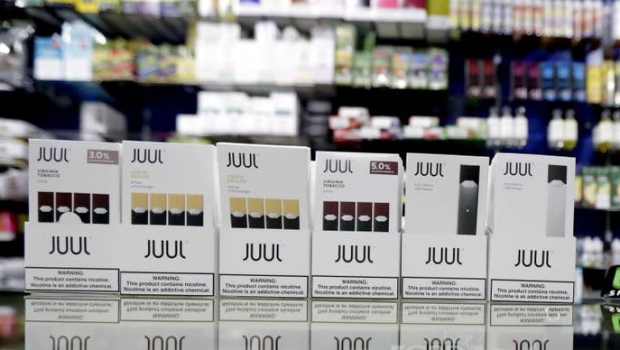 WASHINGTON - A Juul Labs executive who was fired earlier this year is alleging that the vaping company knowingly shipped 1 million tainted nicotine pods to customers.

The allegation comes in a lawsuit filed Tuesday by lawyers representing Siddharth Breja, a one-time finance executive at the e-cigarette maker. The suit claims that Breja was terminated after opposing company practices, including shipping the contaminated flavoured pods and not listing expiration dates on Juul products.

The lawsuit does not specify the contamination issue or how it occurred. Lawyers for Breja declined to elaborate on the issue Wednesday.

A Juul spokesman said in a statement that the claims are “baseless” and that Breja was terminated because he failed to “demonstrate the leadership qualities” required for the job.

Juul, the bestselling e-cigarette brand in the U.S., has been besieged by criticism amid an explosion of underage vaping. The company faces multiple investigations by federal and state officials as well as lawsuits by families of teenagers who claim they became hooked on nicotine through the company's vapes.

Breja worked in Juul's global finance department less than 10 months. The lawsuit, filed in the Northern District of California, seeks damages for lost salary, bonuses and Juul stock, which it values at more than $10 million.

Breja describes a “reckless” and “win-at-all costs” culture at Juul, primarily driven by the company's former CEO, Kevin Burns, who was replaced in a management shake-up last month.

Breja says he learned in March that some batches of nicotine solution used in the company's mint pods had been contaminated. Breja claims that company management shipped roughly one million pods affected by the issue and failed to issue a recall or public announcement.

When Breja protested the decision to ship the pods, the lawsuit alleges, his supervisor at Juul reminded him that “stockholders would lose significant personal wealth should he make his concerns public.”

The lawsuit alleges that Burns “berated employees” to ramp up production of mint-flavoured pods, a move that “compromised quality control measures.” The focus on mint came after the company voluntarily pulled its mango, fruit and other candy-flavoured pods out of retail stores, under pressure from health authorities.

The lawsuit alleges that Juul's outside consultants assured the company that mint “given its fruity flavour, would make up for any lack of sales of other flavoured pods.”

“You need to have an IQ of 5 to know that when customers don't find mango they buy mint,” Burns told employees, according to the lawsuit.

Breja claims he was wrongfully terminated the week after raising his concerns about the contaminated mint pods. Because he had worked at the company for less than a year he did not receive company stock that his lawyers claim would be worth “eight figures at its current valuation.”

In an earlier conflict with Juul management, Breja says he urged executives to add expiration or “best by” dates to the flavoured pods.

The lawsuit claims Burns rejected the idea, stating: “Half our customers are drunk and vaping like mo-fo's, who the f--- is going to notice the quality of our pods.”

Juul's website states that its pods are intended for use “soon after purchase.”

Last month Burns was replaced by K.C. Crosthwaite, a former executive for Altria, the Big Tobacco firm that owns a 35% stake in privately held Juul.

In the last two years, the San Francisco company has become the principal target of a nationwide backlash against e-cigarettes, with parents, politicians and health advocates blaming the firm for the recent vaping craze among young people.

According to the latest government survey, more than 1 in 4 high school students reported using e-cigarettes in the previous month, despite federal law banning sales to those under 18.

In a separate health issue, federal officials are investigating more than 1,600 cases of lung damage linked to vaping, including nearly three dozen deaths. Many patients said they vaped THC, marijuana's intoxicating chemical, but officials have not yet implicated any single product or ingredient.

Juul has made a series of voluntary concessions in an effort to weather the firestorm. It's halted advertising and suspended sales of its fruit and dessert flavoured pods. The company continues to sell mint, menthol and tobacco flavours.

The Trump administration announced plans last month to remove virtually all vaping flavours from the market, leaving only tobacco.

But public health advocates are concerned the administration could back away from its plan to ban mint and menthol, the most popular flavours among youth.

Last month more than 50 health groups, including the American Lung Association and the American Academy of Pediatrics, sent a letter sent to first lady Melania Trump urging the administration to follow through on its initial proposal.

“If the goal is to remove the e-cigarettes that are most attractive to youth, any proposal that ignores mint and menthol flavours falls short,” the groups stated.