Four in custody, four sought after two men in their 20s robbed downtown 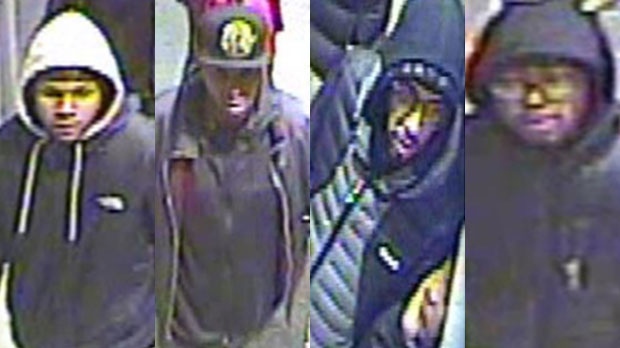 A composite image of four male suspects wanted in connection with a downtown robbery is seen. (Toronto Police Service)

Four males are in custody and another four males are being sought by police after two men in their 20s were robbed in the downtown core on Saturday night.

At around 11 p.m., officers responded to a call for a robbery near Dundas Street East and Victoria Street.

The two male victims were in the area at the time when they were approached from behind by a group of men.

One of the men in the group allegedly showed the victims a firearm while demanding their personal items. Police said one of the male victims was struck with the firearm.

The group of men then fled the scene, according to investigators.

Officers responding to the call were able to arrest a 16-year-old boy, 32-year-old Abdulla Addulkadir Musse, 26-year-old Videlle Rutherford and 18-year-old Stevon Thavanayagam in connection with this case. The four Toronto males have all been charged with robbery with a firearm.

Musse, Rutherford and Thavanayagam appeared in court on Sunday.

The 16-year-old boy, who cannot be identified as per the terms of the Youth Criminal Justice Act, is scheduled to appear in court on Jan. 24.

Investigators have released security camera images of the four outstanding male suspects in an effort to identify them. All of the suspects have been described as males in their 20s.