Four months after implementation of 'buck a beer,' only one brewery participates 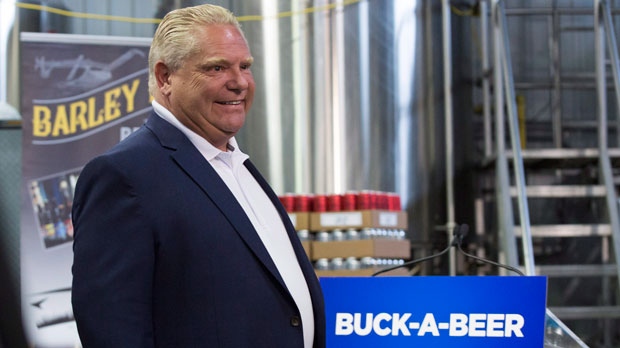 Ontario Premier Doug Ford arrives for the for the buck-a-beer plan announcement at Barley Days brewery in Picton, Ont., on Tuesday Aug. 7, 2018. (THE CANADIAN PRESS/Lars Hagberg)

TORONTO -- Four months after Doug Ford delivered on his campaign promise to bring back "buck a beer," the only brewery still offering the option appears to be one in the Ontario premier's west Toronto neighbourhood.

When Ford announced incentives for companies selling beer at $1 for a bottle or can last August, two breweries took him up on the offer -- Cool Brewery in Toronto and Barley Days Brewery in Picton, Ont.

Loblaws also offered its President's Choice beer for a dollar a bottle for a limited time.

But now the Liquor Control Board of Ontario says the Barley Days Brewery beer that had been available for a dollar -- plus the 10 cent deposit -- has raised its price to $1.65.

The Crown corporation in charge of alcohol sales in the province says that as of Monday, Cool Lager was the only "buck a beer" still available on its website.

The government offered businesses that agreed to sell "buck a beer" for a dollar prime spots in LCBO stores and advertising in the store magazine's inserts.