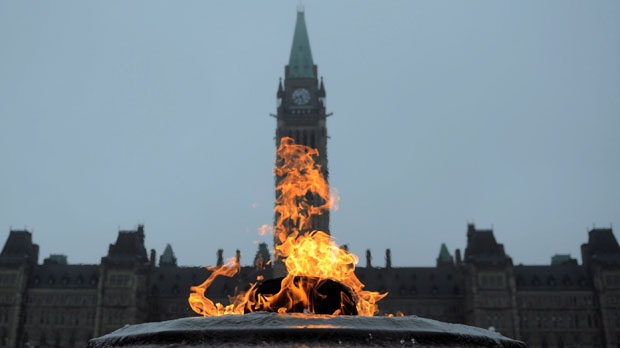 OTTAWA -- The political race is on to frame the government's marquee income-splitting plan as either a financial boon to Canadian families with children or a "retrograde" measure skewed towards men and the wealthy.

The stakes are high for all the parties, who are fighting for the support of some key constituencies -- women, suburban voters and the middle class -- in the lead-up to the 2015 election. Their attitude toward the tax measures will be key.

The NDP flat-out calls the income-splitting plan "paternalistic" and "backwards."

"While we've got serious labour shortages and the working population is aging, this is the last thing we should be doing."

To illustrate what he considers the plan's lopsided priorities, Liberal Leader Justin Trudeau has emphasized the fact that high-earning fathers such as himself and Prime Minister Stephen Harper will reap its benefits.

Cabinet ministers, meanwhile, fanned out across the country Friday to highlight income splitting and the government's suite of other tax measures for families with children under 18.

The income-splitting proposal would allow the higher-earning spouse in such a family to transfer up to $50,000 in income to the lower earning spouse, lowering the marginal tax rate of the former.

One of the central criticisms of income splitting is that it could create a disincentive for the lower-income spouse -- in most cases a woman -- to return to or join the workforce. The calculations done before one decides to take a job would take into account potential earnings versus how much will be lost in tax breaks and credits.

For example, a non-working mother who currently pays no tax would suddenly find herself in a tax bracket as a result of income splitting. Getting a job would bump up her tax rate even further.

The C.D. Howe Institute studied the Conservative party's initial income splitting proposal in 2011, and found that the wealthy benefited the most, and also that the measure might deter the lower-income spouse from entering the workforce.

Now that the government has put a $2,000 cap on the tax benefits, study co-author Alexandre Laurin said the same trends hold, but they just aren't as pronounced.

"It would usually always be above-average families that get the most, it's kind of by definition," said Laurin.

He added: "One of the consequences of joint taxation is that it affects the incentives for the lower-income spouse to work more or to participate in the labour force, and that will not change."

Lisa Philipps, a law professor at York University's Osgoode Hall, has studied the impacts of income splitting, including the gender equity implications. She said her main gripe with the tax proposal is that it eats up so much money that could be directed elsewhere.

On Friday, TD Economics predicted that the tax proposals, combined with lower oil prices, would mean the approximately $5 billion in total surplus room this year would be used up.

"It really makes no sense, and is an irresponsible use of public funds," said Philipps.

"It's not really addressing where the need really lies in our society, and that's a gender issue but it's also frankly a...poverty issue about who's really struggling and who's really in need of help, and it's not men or women earning six figures."

The Conservatives have tried to insulate themselves from some of the criticism of income splitting by simultaneously introducing other measures that will benefit Canadians with children across the board -- such as enhanced child care benefit cheques and an increase in the child care tax deduction.

Offering parents of children under six a $100 per month cheque back in 2006 was one of the factors in the Conservative party's election victory. On Friday, the government expanded that program to provide $60 a month for families with older kids.

"Our government is expanding the universal child care benefit to provide $720 to every child from six to 17 years old," said MP Andrew Saxton, parliamentary secretary to Finance Minister Joe Oliver.

"This will be a huge relief on the daily pressures that ordinary Canadian families face."

But the opposition is focused squarely on the income-splitting plan.

The NDP has proposed a national child-care plan, arguing from the opposite end of the spectrum that it would encourage women to rejoin or stay in the workforce.

There are some vocal proponents of the measures, including the Institute for Marriage and the Family. That organization and others have long bemoaned the fact that single-earner families bear a bigger tax burden that dual-income families.

"Our research shows that families work as a unit, sharing money and resources as needed," the institute said following the announcement.

"This sharing strengthens families, which in turn benefits society and the economy. To date, the Canadian tax code has done a poor job of reflecting this reality since family members are taxed as individuals."