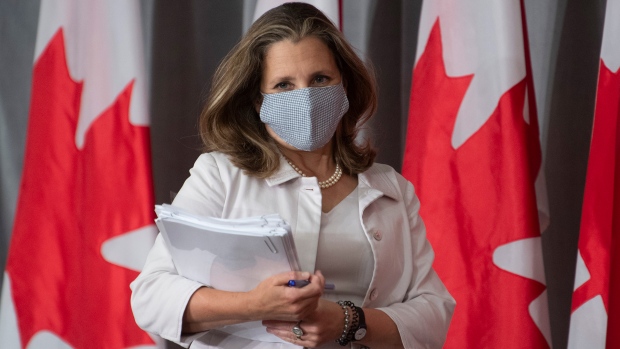 OTTAWA -- Justin Trudeau first met Chrystia Freeland at a 2012 Toronto signing for her award-winning book, Plutocrats: The Rise of the New Global Super-Rich and the Fall of Everyone Else.

The tome chronicled how globalization and the technology revolution has created a new class of uber-wealthy people, “a nation unto themselves” who wield outsized political clout that has produced economic policies designed to make them ever richer while incomes for everyone else stagnate.

Trudeau was so impressed by it that he spent the next eight months trying to persuade the veteran financial journalist to abandon her job as a managing director at Thomson Reuters and join the Liberal team.

Even before she won a Toronto byelection in the fall of 2013, Trudeau named her to co-chair his economic advisory council, which would be instrumental in crafting the Liberals' winning 2015 election platform.

The book meshed with and helped inform Trudeau's thinking: the need for economic policies that would bolster the middle class and shrink the ever-widening gap between the wealthiest one per cent and everyone else.

And it was reflected in the 2015 platform, which promised a tax cut for middle-income earners and an enhanced child benefit, while hiking taxes on the wealthiest.

With Freeland now the federal finance minister, it's worth revisiting Plutocrats for glimpses into her thinking as she takes charge of plotting Canada's economic recovery in the face of a still-evolving pandemic, double-digit unemployment and a sea of red ink.

Here are some highlights from the book, which offer some insight into her views on deficits, taxes, joblessness and government regulation of the financial sector.

Freeland approvingly summarizes the warning of some economists: “In an age of super-wealth, we need to be constantly alert to efforts by the elite to get rich by using their political muscle to increase their share of the pre-existing pie, rather than by adding value to the economy and thus increasing the size of the pie overall.”

She points to the 2008 financial crisis as an example of how extraordinarily wealthy bankers and captains of finance convinced governments around the globe to relax regulation of their activities, which wound up costing governments trillions in bailouts. And she credits Paul Martin, as Liberal finance minister in the 1990s, for resisting calls to deregulate in Canada as well.

“The self-interested, and ultimately self-destructive, herd mentality on Wall Street and in the City of London shaped policy around the world but it didn't prevail everywhere.

“One exception was Canada. Canadian regulators required their banks to hold more capital and permitted less leverage than their peers in London and New York. The result was no bailout of the Canadian financial sector and a recession (and budget deficit) that were much softer than in the United States.”

She applauds Mark Carney, Bank of Canada governor during the 2008 crisis, for standing up to captains of finance who continued to resist more stringent regulation even after the crisis. Carney, who later became governor of the Bank of England, is now informally advising the Trudeau government on its plans for economic recovery.

“In the fall of 2011, Carney became a protagonist in a central battle between the plutocracy and the rest of us - a crucial fight over the regulatory power of the state.”

The issue for Carney was “whether the interests of business and of the community at large are always the same and, if they aren't, whether the government has the will, the authority, and the brains to defend the latter, even against the protests of the former.”

She wrote of how the super-rich have bankrolled a network of conservative think tanks, elite journals and mass media outlets to dominate debate over economic policy. She bemoans the fact that in the spring of 2011, when U.S. unemployment was at nine per cent and the cost of borrowing was at a then-historically low three per cent, the five largest American newspapers published 201 stories about the budget deficit and only 63 about joblessness.

“The left won the great culture wars of the 1960s but the right has succeeded in setting the terms of the economic debate. A good outcome for the one per cent.”

The “soaring inequality” between the uber rich and everyone else has an impact on “civic values, on crime rates, on morality, or even, according to some studies, on health,” Freeland writes. “The big danger, though, is ... as the people at the very top become ever richer, they have an even greater ability to tilt the rules of the game in their favour.”

“... Low taxes, light-touch regulation, weak unions and unlimited campaign donations are certainly in the best interests of the plutocrats, but that doesn't mean they are the right way to maintain the economic system that created today's super-elite.”