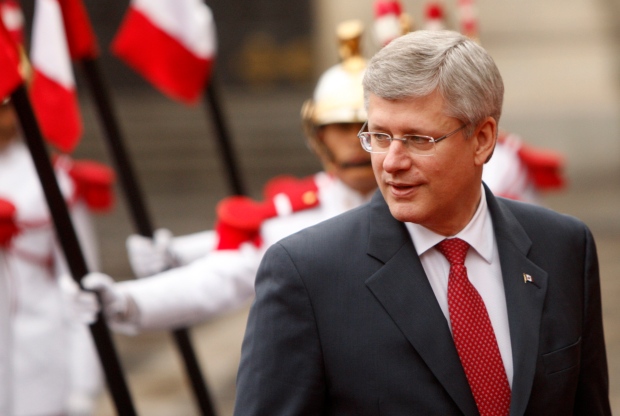 OTTAWA, Ont. -- Prime Minister Stephen Harper expressed concern Monday that Ukraine is backsliding toward its communist past under the Soviet Union, a clear dig at Russia as it prepares to host next month's Winter Olympics.

The prime minister offered that sharp assessment in the House of Commons in response to a question from NDP Leader Tom Mulcair.

"We are very concerned that these actions speak (of) not moving towards a free and democratic Euro-Atlantic future but very much towards an anti-democratic Soviet past," Harper said.

Harper's remarks represented a shot across the bow of Russian President Vladimir Putin, who has been accused of exerting pressure on Ukraine President Viktor Yanukovych to curb his country's overtures to the West.

The protests began in late November when the government abandoned an agreement to strengthen economic co-operation with the European Union, in favour of closer ties with Russia.

Anger rose sharply earlier this month after the government imposed a tough new law aimed at curbing protests. That sparked clashes between demonstrators and police that have left three protesters dead.

Canada has repeatedly called on Ukraine to embrace co-operation with the democratic EU, instead of moving to align with Russia. Foreign Affairs Minister John Baird, along with other Western foreign ministers, visited the protesters in Kyiv last month to show support.

Mulcair wanted to know what Canada can do to help defuse the escalating crisis that has seen anti-government demonstrators deepening their protest by occupying four large buildings in downtown Kyiv.

"We have certainly condemned the actions. We have been very outspoken with many around the international community and condemning some of the actions of the Ukrainian government," Harper said.

"We will continue to vocalize our concerns, to work with the Canadian-Ukrainian community and our allies to take all appropriate actions necessary to encourage the government of Ukraine to move in a positive direction."

On their first day back to work in Ottawa on Monday, MPs scheduled an emergency take-note debate to condemn the Ukraine government's conduct in the continuing crisis.

The Harper government, like its Liberal predecessors, holds strong views toward the Ukraine because of the deep historical roots of Canadians of Ukrainian descent in Canada, a product of half a dozen waves of immigration dating back well over a century.

"We stand with the Ukrainian people, who courageously continue to speak out in support of democracy," Conservative MP David Anderson told the Commons.

Ontario's Liberal Premier Kathleen Wynne also expressed her support for the pro-democracy movement, and offered her support to her province's "vibrant" Ukrainian community.

"I continue to stand in solidarity with the members of the Ukrainian community and all Ontarians who seek a peaceful and democratic path for Ukraine."

In recent days, the Conservatives have spoken out about the escalating violence in Ukraine.

Harper, himself, expressed concerns aboard his Canadian Forces airliner as he was travelling back to Ottawa from the Middle East this past weekend.

Ambassador Andrew Bennett, who visited Ukraine over the weekend, said Yanukovych's attempted intimidation of the small church could be a sign of worse things to come for other religious minorities.

"This is fundamentally inconsistent with democratic practice and of grave concern to all who are committed to a free and democratic Ukraine."