A 30-year-old man is facing numerous charges after allegedly attacking kindergartners with a curtain rod during recess at an East Gwillimbury school, seriously injuring a boy.

York Regional Police say that just before 1 p.m. Wednesday, they were called to Our Lady of Good Counsel Catholic Elementary School on Murrell Boulevard for a report of an assault.

A mother of a kindergartner at the school who did not wish to be identified told CP24 that a man wearing a helmet on his head was walking with a woman near the school at about 12:45 p.m. when kindergartners were outside for their recess.

A woman who identified herself as Debbie told CP24 her 10-year-old daughter was outside helping supervise the small children when everyone heard a woman yelling “stop, stop.” 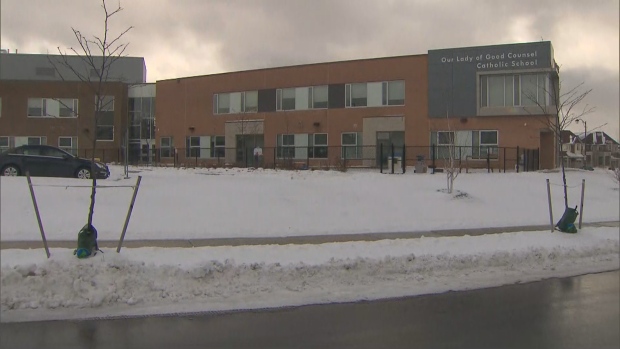 Police say numerous witnesses told them that the man hopped a fence into the penned area where the children were and hit a child with a plastic curtain rod.

The mother of the kindergartner told CP24 her son saw the man furiously swinging at children and teachers.

“He just started swinging it at the children,” she said.

Debbie said her daughter told her that a volunteer parent monitor yelled for all the kids to rush indoors.

“They did but not before one child was hit over the head with the metal pole that this man was swinging at them,” Debbie said. “The parent volunteer monitor, she took this man down, she tackled him to the ground and probably saved a lot of other children from being injured.”

Five-year-old boy Kingsley Corson who was struck suffered a “serious injury,” according to police.

“A guy attacked me,” Corson told CTV News Toronto outside his school on Thursday. “He was running down the street, he jumped over the fence and then he banged me with a stick.”

Corson's father, Tyler, said his child was taken to a hospital where he was diagnosed with a mild concussion.

“He’s a tough kid. I’m thankful [the rod] didn’t catch him in the neck or hit him in the face, take out an eye,” Tyler said. “It’s a bump on the head but it could be a lot worse.” 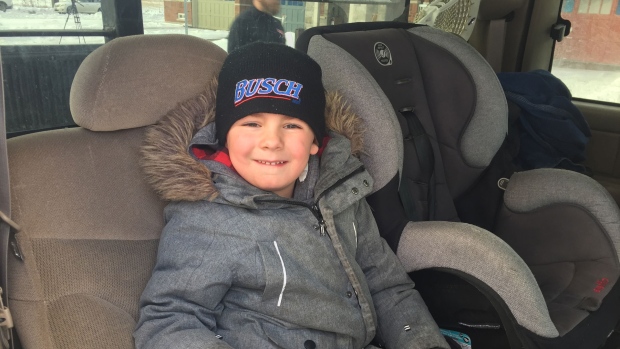 The entire school was placed into lockdown as police and paramedics rushed to the scene.

A teacher took the curtain rod from the suspect, who then went to a waiting car in the school’s parking lot where a family member believed to be a parent put him inside and closed the door.

The suspect, a 30-year-old East Gwillimbury man, who police say lives with cognitive impairment, was arrested and charged with aggravated assault, assault with a weapon, weapons dangerous and common nuisance — endanger life.

He was held in custody pending a bail hearing in Newmarket.

Nicolle said his name is not being released "due to the other personal information that was released" about him "regarding his cognitive impairment."

The first mother told CP24 that older students who have cell phones began messaging their parents, and she learned of what occurred through messages passed to her from other parents, not the school board.

All Debbie was told is that a kid was hurt.

“You hear a child is injured, you don’t know if it’s your own child or what is happening,” she said.

At 2:53 p.m. that day, the principal of the school, Van Quinn, sent a message to parents, detailing an “incident.”

“There was an incident outside the school in the kindergarten yard that resulted in one of our students being hit by a passerby,” the email read. “This person lives in our community with his family, and has special needs. York Regional Police and Paramedic Services of York Region were immediately called to the school. The injured student was taken to hospital as a precaution, and police are questioning the assailant.”

Investigators say they believe the assault was totally random.

“We are committed to the safety of our students and staff, and will always do our best to work with local authorities in such situations, and to make you aware of these events,” Quinn wrote in the email. 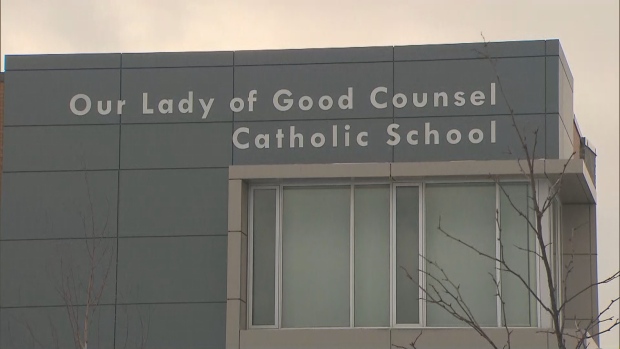 On Thursday, York Catholic District School Board spokesperson Mariann Gordon told CTV News Toronto the board “takes this type of situation very seriously and is deeply concerned that one of our students was injured.”

“The school’s safety plan is being reviewed and, if necessary, will be revised to outline additional steps the school and the board will take to ensure the continued safety of students and staff.”

Both parents who spoke to CP24 expressed concern aboutwhat will occur to keep students safe, and both said they believe the suspect lives relatively close to the school.

Gordon also said a support team has been sent to Our Lady of Good Counsel to assist students and teachers in coping with the incident.

Debbie said police and therapy dogs were at the school Thursday, as well as the victim, who appeared well but still visibly hurt.

“He’s in senior kindergarten, he’s little and he got hit over the head with a curtain rod.”