Health organizations call for end to promotion of vaping products 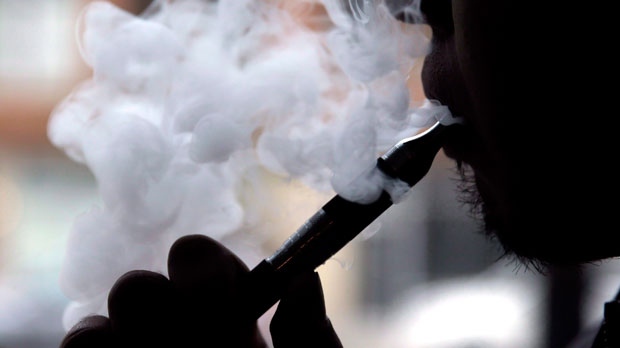 The groups are asking for an interim order to curb the marketing of vaping products, restrict the flavours available and regulate nicotine levels.

Vaping products, the organizations say, should be treated the same way as tobacco products.

"Wasting time on this can only increase the risks to Canadians."

An interim order would allow the government to put in place regulations for up to 12 months while permanent regulations are drafted.

The organizations are asking for all federal parties to commit to issuing such an order within 60 days of forming government, should they do so after the election Oct. 21.

The organizations recommended restrictions on advertising similar to those on tobacco products, the end of most -- if not all -- flavoured products, and a nicotine level restriction of 20 mg/ml in line with European Union standards.

Representatives speaking Thursday shied away from endorsing a full ban on vaping products, acknowledging that some may help people quit smoking or reduce the harmful effects of cigarette use.

The measures around advertising, for example, would not apply to specialty vape stores only open to adults, the groups said.

Instead, the organizations focused on the negative health risks associated with surging vaping rates among youth and the steps required to halt that trend.

A survey done for Health Canada and published this year found that one-fifth of high school students report using vaping products, as are one-seventh of children aged 13 and 14.

Cynthia Callard, the executive director of Physicians for a Smoke-Free Canada, said vaping products have changed in recent years to become more addictive, attractive and accessible to youth.

"In short, tobacco companies are hooking kids on vape products in the same ways they used to hooked their parents and grandparents on cigarettes," Callard said.

Imperial Tobacco Canada issued a statement Thursday saying the solution to recent health concerns over vaping was "enforcement of existing restrictions on sales to youth and prohibitions on flavours appealing to youth" as well as regulations ensuring higher product quality and safety.

The call from Canadian health organizations comes after the news of a serious vaping-related illness in London, Ont., as well as hundreds of cases in the United States, including seven deaths.

President Donald Trump has pledged to ban flavoured vaping products in the United States. On Wednesday, Health Minister Ginette Petitpas Taylor said that Health Canada was looking at new regulations, though the government has not committed to any changes.