Hospitals ask for nearly $1B funding boost: 'Backs are truly against the wall' 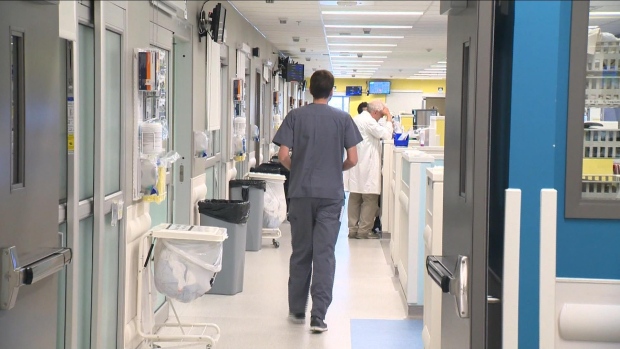 TORONTO -- Ontario's hospitals are asking for a nearly $1-billion increase in the upcoming provincial budget for their sector, after years of underfunding, in order to maintain services and ease overcrowding.

But those projects take time, and this is the level of funding needed to bridge the gap, said president and CEO Anthony Dale.

"We're well aware of the magnitude of this investment, but it is necessary to address underlying inflationary pressures, increase service volumes and create capacity at the local level to ease hospital overcrowding," Dale told the finance committee last week.

"Backs are truly against the wall. Without this investment in Ontario's next budget you will see many hospitals facing some very difficult decisions. And this is a decision that no government and no hospital would ever want to face."

The sector needs an investment of $922 million, which would be a 4.85 per cent increase, Dale said.

Hospitals will otherwise have to make difficult decisions about the levels of service they can provide and their staffing levels, he said in an interview.

"We're really at that turning point, or that threshold if you will, and if we cross it, the hospitals of Ontario are telling me that many of them are facing some pretty difficult trade-off positions next year," Dale said.

The Progressive Conservatives promised in the 2018 election to end hallway health care, but hospitals continue to face overcrowding. A government-commissioned report a year ago found that on any given day at least 1,000 people are being treated in hospital hallways.

Figures obtained by the NDP through Freedom of Information requests show several hospitals at over 100 per cent occupancy rate every month from the July 2018 to June 2019, and with those rates generally climbing.

But a spokeswoman for Health Minister Christine Elliott said hallway health care is starting to decline.

"We are down six per cent or about 60 patients from where we were last year," Alexandra Hilkene said in a statement.

"The Ministry of Health's No. 1 priority is ending hallway health care...While we work toward a long-term strategy for modernizing the health-care system, ensuring the long-term sustainability of Ontario's hospital system remains of vital importance to the ministry."

She could not say if the OHA's funding request would be met, as 2020-21 budgets are still being developed.

Before last year's budget, the OHA said a 3.45 per cent increase was needed. The 2019 budget contained an investment of $384 million, which amounted to an increase of 2.05 per cent. The government announced an additional $68 million in its fall economic statement.

NDP health critic France Gelinas said the sector has been underfunded for a long time, including from 2012 to 2016, when the previous Liberal government froze the base operating funding.

"Hospitals rose to the challenge, they implemented changes and efficiencies," she said. "That was year one. Years two, three, four...were a disaster because they didn't have (any more) efficiencies."

Since that freeze was lifted the Liberals and now Tories have increased funding incrementally.

A recent report from the hospital association said that Ontario spends the lowest per capita on hospitals of all the provinces and those facilities are already the most efficient by various metrics. If Ontario were to fund hospitals at the average rate per capita of all the other provinces, it would cost an additional $4 billion, the report said.