Police have charged three people after a number of statues in Toronto’s downtown core were defaced this morning during a demonstration where protesters called for “monuments that represent slavery, colonialism and violence” to be torn down.

A group of about 30 to 40 people gathered at Ryerson University this morning to attend the rally, organized by Black Lives Matter-Toronto. 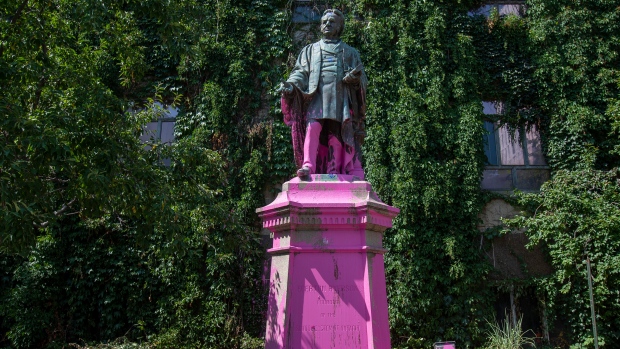 Protesters wrote the words “defund," "disarm," "dismantle" and "abolish” on the pavement near a statue of the university's namesake, Egerton Ryerson, who is widely believed to be one of the architects of Canada’s residential school system.

“Tear down monuments that represent slavery, colonialism and violence,” read a sign affixed to Ryerson’s statue, which was splashed with pink paint.

The group later marched to Queen’s Park, where statues of John A. Macdonald and King Edward VII were also doused in paint.

"Defacing the monuments and having the art display done is actually I think a really good way of showing Canada's long-standing history of violence of both Black and Indigenous communities on these lands," one protester told CP24 on Saturday.

"It is to show that because the police have such a long-standing history of violence, there is a better way that we can care for our communities." 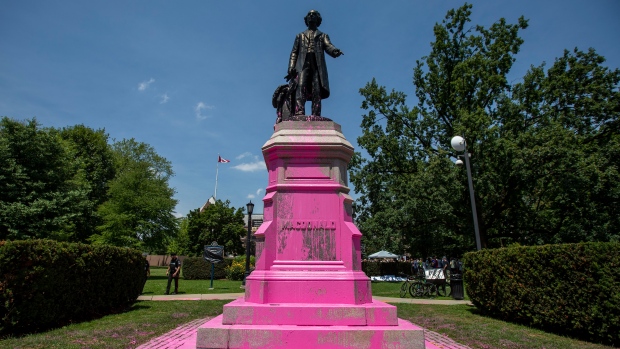 Over the past two months, protests have been held in Toronto and around the globe, demanding an end to racism and police brutality following the death of George Floyd.

Hundreds of protesters calling for the defunding of police also gathered this week outside Toronto police headquarters during a series of town hall meetings on police reform in the city.

Toronto police said they responded to the demonstration this morning to ensure public safety and confirmed to CP24 that a large group was detained.

According to police, three people were arrested and the rest of the group has since been released.

In a statement released on Saturday afternoon, Sandy Hudson, the co-founder of Black Lives Matter- Toronto, questioned why police thought it was necessary to arrest the protesters.

"What was the action? An artistic disruption of tributes to historical racism: Banners were posted. Statues were painted. We called to defund the system that targets us," the statement read.

"Who are the police protecting by detaining people who have done no harm? Why are you these statues of slaveholders and genocide actors more important than our lives?"

Chanting "no justice, no peace," "free them now," and "I know that we will win," hundreds have gathered outside 52 Division Saturday evening, demanding the release of the three arrested protesters.

"We understand we respect the right to protest, but in this incident, where we have statues and monuments that have been vandalized and defaced, the appropriate charges have been laid in this case," Const. Alex Li said during an interview with CP24.

Police initially said Gooch and Smith had been released on a promise to appear. However, Li said all three remain in custody at this time.

Reid is being held for a show cause and will appear in court on Sunday.

"I've spoken to the investigators. They've advised me that all three are still in police custody. They are working on their conditions of release," Li said.

"These investigations are very dynamic in nature, depending on what information comes to light, or if the investigator believes that this person will not appear in court, that will change the conditions of release." 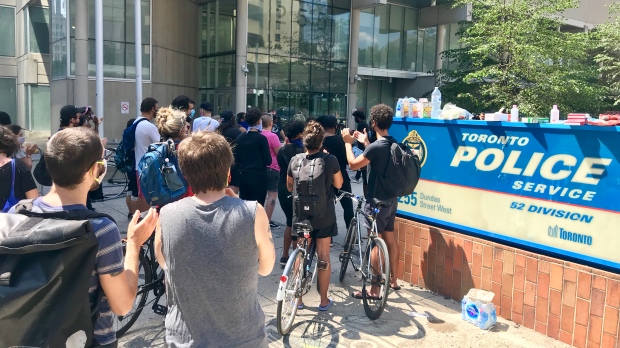 Saron Gebresellassi, who is negotiating the release of all three individuals, said the crowd will remain outside the station until all three are released.

"This is a disappointing turn of events. It did not have to be this way, and I am looking forward to the release of all the arrestees," said Gebresellassi.

"Police at 52 division have made a few missteps have refused to communicate with elected officials, with lawyers, legal counsel, with members of the press. We need leadership. This is not reconciliation, and Canadians are tired of escalating tensions."

Gebresellassi noted that she has spoken to all three after she said they were not given access to a lawyer for hours. Police disputed her claim, saying all three have had access to counsel.

"I've had many clients face all kinds of criminal charges for far more serious affairs who have been released within an hour," she said.

"It seems (they) are being detained almost as pawns in a larger political scenario."

Gebresellassi said one of the protesters needs access to medication. She noted they have doctors lobbying 52 Division to let them provide medical assistance.

Li said he did not have information about the allegation but noted that it is their first priority if police have somebody under arrest who requires medical attention. 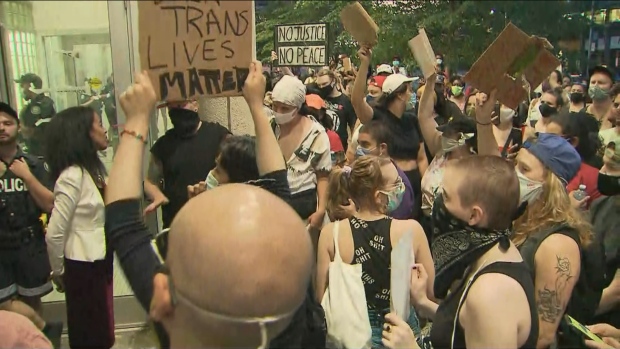 Police later said they worked with the individual's family to coordinate the delivery of the medication hours ago.

"All care has been taken to ensure her safety while she has opted to remain in custody," police said on Twitter.

Among those calling for the release of the protesters are univeristy faculty members, civil society organizations across Ontario, and elected officials, Gebresellassi said.

One of them was Toronto councillor Josh Matlow who posted on Twitter that he went to the station to understand the situation.

"I ask you, for a moment, to put aside whether or not you agree with throwing paint on a statue. Because what I witnessed today, should concern all of us..," Matlow said.

The councillor further said that he was with the protesters' lawyer and witnessed how police allegedly denied the lawyer access to her clients several times.

1) I called 52 Division repeatedly and couldn’t get through. So I got on the subway & went there to understand the situation. I ask you, for a moment, to put aside whether or not you agree with throwing paint on a statue. Because what I witnessed today, should concern all of us..

"This can't go on this way. We have a responsibility to change this. We will change this. This is about a basic and reasonable expectation of justice, and access to legal representation," Matlow said.

Gebresellassi said the right next step is to release all three immediately.

In an update just after 9:30 p.m., police said the three individuals declined to sign the release forms to leave custody.

In response, Gebresellassi said she would like police to let her inside the station and talk to her clients so that she could negotiate and execute the release.

“If they're saying that's the case, show me the form and let's get a job done and disperse,” she said.

“This can all end in two minutes. But they need to actually speak with a lawyer. Let me review the conditions, sign it and call it a night before things escalate.”

Saunders responds to the protest at 52 Division

Speaking to CP24 on Saturday evening, Toronto Police Chief Mark Saunders said there is tremendous misinformation about the case that is being pushed and supported.

"This is not a case of people being held against their will. It's about people who choose to be," Saunders said.

Echoing what police said earlier, Saunders noted that the individuals refuse to sign a release that says they'll promise to appear in court.

"This is up to them. They can choose whether or not they want to be outright now on this a warm night, or if they want to choose to make a statement and rally up more people," he said. 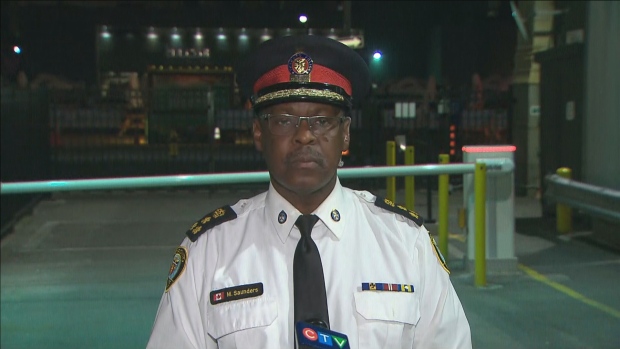 When asked about allegations that Gebresellassi was not given access to meet her clients for hours, Saunders said the individuals initially did not know that she was the counsel.

"I will tell you that the moment, the very moment that it was identified that she was somehow representing, access to her was given," Saunders said.

He noted that police record all the moments when officers bring people in at their facilities.

Also, Saunders said police facilities are closed due to the COVID-19 pandemic.

"With the thousands of arrests that we have, the procedures are met in accordance to law as is this one. It's unfortunate that things are being manufactured from that end, a little disingenuous," he said.

He also noted that police have addressed the medical needs of one of the protesters as soon as they became aware.

Saunders said the "manufactured" storylines are creating a divide and taking the focus away from the real issue.

"And then we have others right now that have pink paint on them for allegedly using that paint on statues. And I've got people at 52 division right now (who) are rallying towards that cause."