'I do not use crack cocaine,' Mayor Ford tells reporters

The embattled mayor of Toronto stepped before a mob of journalists Friday afternoon to formally deny allegations of drug use.

On the evening of May 16, the Toronto Star alleged that two of its reporters had viewed cellphone video that appeared to show the mayor smoking from a glass pipe.

The Star reported that it had been approached by Somali drug dealers who wanted to sell the video for a six-figure sum, but the newspaper declined and the alleged video has not yet surfaced.

Ford spoke to reporters briefly the day after the report surfaced, dismissing the allegations as "ridiculous" and blaming the Toronto Star for having a vendetta against him.

"As for a video, I cannot comment on a video that I've never seen or does not exist," he told reporters. "It is most unfortunate, very unfortunate, that my colleagues and the great people of this city have been exposed to the fact that I have been judged by the media without any evidence."

The mayor has been heavily critisized in the media this week for not taking reporters' questions about the allegations.

Ford said he remained silent this week because of the legal advice he was given from his solicitor.

He also used the opportunity to address two bombshells that dropped this week after the allegations surfaced.

On Wednesday, the Toronto Catholic District School Board announced the mayor would no longer be coaching the Don Bosco football team -- a job he publicly revered and often left council to attend.

The school board did not make mention of the allegations or give any specific reason for his dismissal other than to say they were heading in a different direction.

On Friday, Ford thanked the team and wished them great success.

"These kids are phenomenal kids who have bright futures and can do anything if they put their mind to it," he said.

He also addressed the firing of his chief of staff, Mark Towhey. Towhey was dismissed suddenly Thursday afternoon.

Neither Ford nor Towhey have confirmed the reasons for the move, but a source close to the situation has confirmed to CP24.com that Towhey was relieved of his duties after suggesting to Ford that he seek help for “addiction issues.”

Ford did not comment on the situation other than to thank Towhey for his service.

Ford took no questions at the news conference and walked out as reporters continued to inquire about the allegations. However, he was followed on the podium by his brother, Coun. Doug Ford, who reiterated the mayor's stance.

Coun. Ford once again questioned the validity of the Toronto Star report and threatened to walk out when reporters interrupted him to point out that an American website was making the same claims. The editor of Gawker said he viewed the alleged tape and published a report with details before the Star published their version.

Coun. Ford blasted Gawker for using a crowdsourcing website to raise funds for them to buy the tape in question.

"I think it's disgusting, as I've said before, that an organization like Gawker would go out there and deal with extortionists," he said.

Donations continue to trickle in even after Gawker editor John Cook announced Thursday that he had not been in touch with the man selling the tape since Sunday.

Some of the mayor's colleagues on council reacted to his statement immediately afterwards, expressing disappointment with how he handled the situation.

"I'm not sure he went far enough, I'm not sure if the response was comprehensive," Coun. Jaye Robinson told reporters. "This is absolutely clearly not over. It's distracting and the distractions have to end."

Coun. Glenn De Baeremaeker had some scathing words for the mayor, calling for his resignation.

"I am profoundly disappointed," he said. "The mayor is imploding."

De Baeremaeker said he doubts the mayor and questioned why reporters would put their career on the line to make up a story this explosive.

"He should do the honourable thing and resign," he said.

On Twitter, some people questioned what appeared to be the mayor's careful use of language.

"Why didn't he say 'I never (sic) used crack,'" said a Twitter user identified as Ras Cobby. "I love this man, wish him the (sic) best."

"It's a good first step," he said. "I'm glad to see that he's done this. I don't imagine the matter is going to go away. I was saying before, the only thing that's probably going to end it is if we could get our hands on the tape."

Meanwhile, both the mayor and his executive committee insisted Friday that despite the drama that has engulfed city hall, councillors and staff are working as usual to get city business done.

"I would like to assure everyone we are continuing to fight for the taxpayers every day and it's business as usual at city hall," Mayor Ford said during the news conference. "This administration is turning the corner and I will continue to do what the great people of this city elected me to do, and that is to keep taxes low and to improve customer service and to reduce the size and cost of government and continue to invest in our infrastructure."

The mayor's statement to reporters came less than an hour after the executive committee released an open letter, assuring the public of the work that's being done despite the scandal and publicly calling on the mayor to break his eight-day silence and formally address the allegations.

"As members of Toronto's Executive Committee, we would like to assure all Torontonians that the city's business continues without interruption," the letter says. "Committees are at work, community meetings are going forward and constituent issues are being resolved."

"Nevertheless, the city needs continuity and leadership," it continued to say.

Earlier in the day, more of the mayor's colleagues and even Ontario's premier voiced their concern with the situation.

Premier Kathleen Wynne called the saga "unfortunate," while noting that there are "mechanisms" in place should "legal issues arise."

"It's unfortunate when there are issues that arise that make it a tumultuous situation in a local government, but that's the reality," Wynne said from an event in London, Ont. 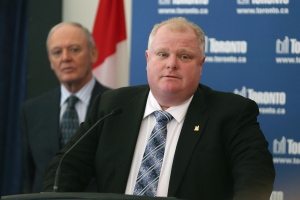 Read the full text of the mayor's statement here 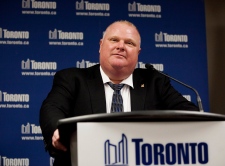 Toronto Mayor Rob Ford speaks to the media at Toronto City Hall on Friday, May 24, 2013. (Michelle Siu /The Canadian Press) 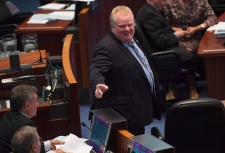 Toronto Mayor Rob Ford walks the floor during a council meeting at Toronto City Hall on Tuesday May 21, 2013. THE CANADIAN PRESS/Nathan Denette