'I think we owe it to the public:' Peel residents could soon have access to neighbourhood-specific COVID-19 data 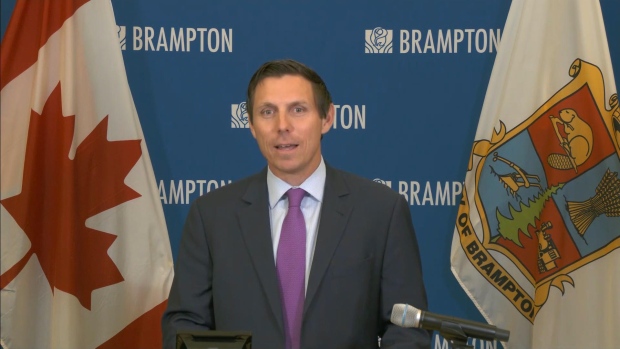 Peel Region residents could soon have access to geographic data that will show which neighbourhoods have become the biggest hotspots for COVID-19.

At his weekly briefing on Wednesday, Brampton Mayor Patrick Brown said that he has been repeatedly asked by residents for neighbourhood-specific data in the wake of Premier Doug Ford identifying the city as a COVID-19 hotspot earlier this week.

He said that he has now made the request of public health officials and has been assured that the data will be made available “as soon as possible” so that residents can know “where the areas of greatest concern are.”

“I think transparency is the best recipe when we are dealing with a pandemic so I am glad that there is a move afoot to release what areas in the GTA have a higher circulation of the virus,” he said. “I have had a good sense in my conversations with the premier for where they are in the GTA but I would love for the entire community to know. I think we owe that to the public.”

There have been 4,230 confirmed cases of COVID-19 in Peel Region since the outset of the pandemic with more than half of those cases involving Brampton residents (2,141).

At Wednesday’s briefing, Peel Region’s Medical Officer of Health Dr. Lawrence Loh said that the seven-day moving average of cases in the region has now been on the rise for a week “driven by new outbreaks in household clusters and also centred in workplaces.”

He said that while neighbourhood-specific data “can be helpful” it paints an incomplete picture as it doesn’t necessarily reflect where people contracted the virus.

Nonetheless, he said staff at his office are actively trying to figure out how to provide the data with the appropriate “context and nuance.”

He did not provide a timeline for the release of the data.

“Brampton’s population is highly mobile and interconnected with the GTA, which means that acquisition of the disease could happen far away from home as opposed to the area they may show up,” he warned. “What we know now is that cases are spread out across Brampton and across the region of Peel, which is why people must continue to take precautions when you are out and about regardless of where you might be in the community.”

While the province is now in phase one of its reopening plan, Loh said that Peel Region is “far from being out of the woods with COVID-19.”

For his part, reiterated the calls of many experts and said that testing must be ramped up in order to allow for a wider reopening of the city.

He said that he has spoken with Premier Ford about making mobile testing available to some of the city’s largest business, most notably an Amazon fulfillment centre on Heritage Road that employs thousands of people.

He said that he also formally asked that all city employees get tested in the wake of the province loosening its criteria.

“There is a real push in the city of Brampton to make sure we can scale up testing and get a handle on where the virus is,” he said.