'I would not wish this horror on anyone but you,' Neville-Lake says to Muzzo at sentencing hearing

The mother of three children killed in a drunk driving crash last September sobbed in court as she told the man who has pleaded guilty to the crime how her life has been destroyed by his actions.

“I would not wish this horror I am living on anyone but you,” Jennifer Neville-Lake said raising her voice through her tears, looking directly at Marco Muzzo as he sat in the prisoner’s box. “You deserve to know exactly what it feels like to have every single child you create meet someone like you.”

The 36-year-old mom, who also lost her 65-year-old father Gary Neville in the crash, was one of 14 people who submitted victim impact statements Tuesday.

Court heard from Neville-Lake, her husband Edward Lake and their family members as well as four community groups.

Muzzo flew home on his family’s private jet from his bachelor party in Miami and drove home from the airport on Sept. 27, 2015. His blood alcohol level was three times the legal limit when his Jeep Cherokee SUV slammed into the family’s minivan in Vaughan. Court documents show that Muzzo could barely stand and had urinated in his pants after the accident.

Neville-Lake read out her victim impact statement for nearly an hour, detailing the emptiness she and her husband have felt since having their family die.

“Shame on you for taking my loves for me. Now it's another 5 a.m. wake up, another day of this hell on earth that I live in because of you,“ she said emphatically. “I am listening in vain for my kids to call out my name and I don’t hear them. I don't have anyone left to call me mom. Not one left. You killed all my babies. No more cries of ‘mommy’, or ‘mom, I have a question’.”

“You have silenced my children's voices, taken away their right to speak,” she continued. “Where there was once joy in waking up and greeting the day, there is now only despair and heartache.”

She described a fun and busy life with her children, Daniel, 9, Harry, 5, and Millie, 2, who liked to dance, swim and play and write letters to superheroes and Santa Claus. She described her father Gary as her rock, the man who “taught her how to drive responsibly and respect the rules of the road,” she said pointedly.

“When I crack my knuckles I can hear the bones. Did the sounds of my kids’ necks snapping echo in the car? Is that the last sounds Daniel and my dad heard? Is that what keeps my mom up crying at night?”

Neville-Lake, who was described by her family in the courtroom Tuesday as a bubbly and joyous woman who lived for her children, said she and her husband Edward are now on suicide watch. Their children were killed days before their 10thwedding anniversary.

“Edward and I spent almost 10 years of our marriage creating and building dreams full of hope and joy, looking forward to tomorrow. You drove drunk five days before our 10th wedding anniversary. Ten years and only caskets, urns and a grave to show for it, because of you. You are responsible for us having no more hope, no more joy, no more dreams, no more point to living for me.”

She told the court how she has seen her husband become a “shadow of the man he used to be” as he now battles with depression and night tremors.

She recalled how when they drove to the hospital after hearing of their child’s death, he kissed her and tried to jump out of the car repeatedly.

“I’m not sure who cries the loudest, whose nightmares are more terrifying or whose tears are on my pillow anymore,” she said.

Edward Lake also submitted a victim impact statement though he chose to have a relative read it on his behalf while he stood at the front of the courtroom looking at Muzzo as his words were read out.

“The pain is excruciating,” he said. “The pain in mine and my wife’s eyes are too much to bare.”

Lake described how he used to take care of the kids, make them lunch and take them to school before going to work a shift at Longo’s. He hasn’t been back to work since the accident because of the psychological trauma he’s endured.

“I was looking forward to raising our children and watching them grow up but now that will never be,” his victim impact statement said. “Because of you, we will live with this horror for the rest of our lives.”

Muzzo, who was taken back into custody after being out on bail, asked that he be kept in segregation.

He is expected to speak tomorrow and address the family for the first time. He could face between five and eight years in jail.

Jennifer Neville-Lake and her husband Edward leave the courthouse after speaking to the media in Newmarket, Ont., on Tuesday, February 23, 2016. A woman who lost her three children and father in a horrific drunk driving crash broke into tears Tuesday as she spoke to the man responsible for their deaths before a packed Ontario courtroom. THE CANADIAN PRESS/Nathan Denette 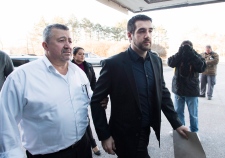