In York Region, Ford's plan to build Hwy. 413 looms large in this election 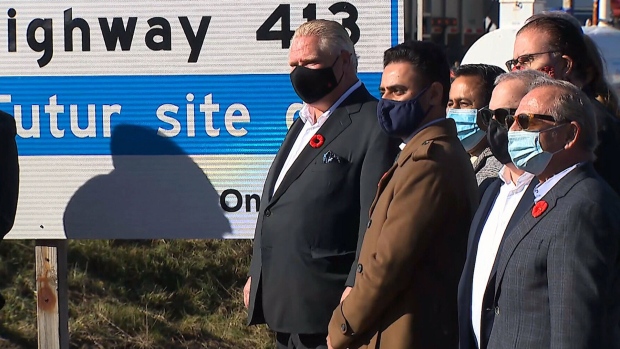 North of Vaughan, a quiet stretch of hilly grassland in King Township may soon host the terminus of the first new major multi-lane highway project seen in Ontario in years.

Ontario PC leader Doug Ford is pledging the roadway – Highway 413 – could save commuters from some areas of the GTA 30 minutes of travel time.

It’s a claim most independent analysis and all of Ontario’s major opposition parties doubt, but Ford is sticking with it anyway.

Speaking from the quiet hamlet of Laskay, in King Township, Sherry Draisey says she understands an interchange of the highway will be built about 1.6 kilometres northeast of her home.

“I am one of the people who will be very badly affected,” she told CP24.

She says the new highway, meant to link highways 407 and 401 to the northern end of Highway 410 in Brampton and head east to join Highway 400, will lead to so much additional road traffic that no one will want to locate to Laskay.

“It will wipe out Laskay,” Draisey, who identifies herself as an environmentalist, says “They’ll just wait for our property values to go down – and then the developers, we’ll just be wiped out.”

Draisey’s local mayor and council in King Township oppose the project, but the region’s overall municipal council is in favour of building the mega-highway.

“While they’re building it, the congestion – traffic-wise, it will be mind-boggling.” 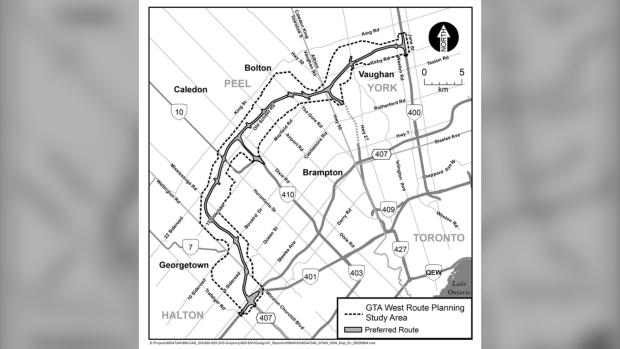 CP24 has been asking provincial bureaucrats and elected officials how much the highway will cost, periodically over the past two-and-a-half years.

No one has provided a dollar figure, even an estimate.

The Ford government says that they cannot release cost estimates while the project is being put out to tender.

They argue the region is growing so quickly it needs a new highway to allow commuters to bypass the often-clogged 401 or the pricey 407 toll highway.

All three major opposition parties are dead set against the project.

The Liberals say they estimate the highway will cost $10 billion to construct, and if elected they will divert all of the money to schools.

“Everyone wants to get rid of congestion but I really don’t think this will help anyone for 10 or 15 years,” Draisey said. “It’s going to get worse.”

Elsewhere in the realm of transportation, York Region still manages to feature large in candidates’ list of priorities.

Just before the writ period, the Ford government approved a fifth station on the Yonge North Subway Extension, taking the Yonge line north into Thornhill and Richmond Hill.

One move by Ford that’s already sure to be resonating with voters in York Region is his decision to cancel all license plate sticker fees for personal vehicles in the province and rebate any fees paid since 2020.

The pledge cost the treasury $1.8 billion; not the $1 billion several spokespeople suggested at the time it was announced.

For anyone who owned and plated a vehicle during the entirety of the past two years, it provides rebates of $240 per vehicle, and is not limited or capped, meaning some multi-car households in suburban areas could net nearly $1,000 or more.

According to an analysis by Environics Analytics, four of the top ten ridings for cars owned per household are in York Region, with Markham-Unionville taking the cake with an average of 4.25 cars per household.

Neither the NDP nor the Liberals have said they would reverse the move.

Even with rising rates, housing still costly in York

All three parties are promising efforts to increase the supply of housing, with the Conservatives increasing taxes on foreign buyers and planning to build 1.5 million homes in 10 years.

The NDP are promising an end to exclusionary zoning and a portable rental benefit.

The Liberals are also promising to build 1.5 million homes as well, and both they and the NDP are promising to return rental controls removed by the PCs in 2018 on newly available rental units.

They better hurry up. In 2019, the subsidized rental waitlist for single person households in York Region was more than 11 years.

York Region at a Glance:

Race to watch: Vaughan-Woodbridge. Liberal leader Steven Del Duca is attempting to return to the legislature after PC Michael Tibollo beat him by more than 7,000 votes in 2018. After leading the party without a seat at Queen’s Park for two years, a loss would spell trouble for Del Duca.