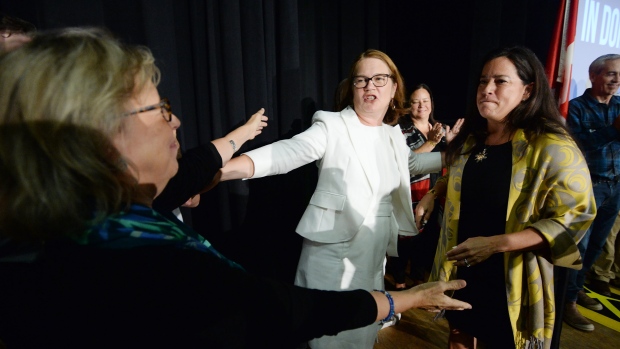 VANCOUVER - Indigenous candidates and community leaders expressed shock, pain and frustration Thursday after multiple photographs surfaced of Justin Trudeau made up in brownface and blackface.

It's “absolutely unacceptable” that Trudeau wore skin-darkening makeup at age 29 in 2001, said Joan Phillip, the NDP candidate in Central Okanagan-Similkameen-Nicola in B.C.'s Interior.

“His apology is hollow. There's two parts to the apology. There's the apology and then there's, 'How do I make it right?' Just like Canada when they apologized for what they did to us. They have to make it right,” said Phillip.

“If he had any integrity whatsoever, he'd just step down.”

The 2001 photograph of Trudeau dressed as Aladdin at a party while a teacher at a Vancouver private school emerged Wednesday. Since then, more images of Trudeau in dark face paint have surfaced, including a video from the early 1990s.

Trudeau apologized for a second time Thursday, saying he didn't recall some of those earlier images, he didn't see at the time that it was wrong because of his privileged upbringing and he deeply regrets his behaviour.

At the B.C. conference, several Indigenous candidates said they felt hurt by the images, particularly given that Trudeau elevated the hopes of First Nations across the country in 2015 with promises of a renewed relationship.

“We can't wash the colour of our skin off. This is who we are,” said Lydia Hwitsum, the Green candidate in Cowichan-Malahat-Langford on Vancouver Island.

“When you think about how we as Indigenous people have battled against discrimination and all of the harms and hurts that have happened because of the colour of our skin ... it's just frustrating to see a leader who can't set the sort of example that this country deserves.”

Bob Chamberlin, the NDP candidate in Nanaimo-Ladysmith, said the photographs highlight that racism is “alive and well” in Canada.

The Liberal candidate in Nanaimo-Ladysmith, Michelle Corfield, said she had been thinking about how some children from the Musqueam Nation attend West Point Grey Academy, the school where Trudeau taught in 2001.

She said she was disappointed but believes everyone deserves forgiveness when they ask for it.

“I hope the country learns a lesson from this,” Corfield said. “He has asked for forgiveness, he has said sorry, it is now time for us as a country to look at that and take something from it.”

Terry Teegee, regional chief of the B.C. Assembly of First Nations, said he feels “disappointed and disgusted,” like many Indigenous people.

“It's one thing if it's once, in high school, and you don't know any better. If it's your go-to costume, there's something wrong in terms of perpetuating this very racist attitude towards minorities,” he said.

Green Leader Elizabeth May and Independent candidates Jody Wilson-Raybould and Jane Philpott also attended the conference. All condemned Trudeau's photographs, with May saying she felt “physically ill” when she saw them.

May said she doesn't think Trudeau understands that settler Canadians are people of privilege, and if he wants to stand in solidarity with Indigenous Peoples, he has to “step up.”

“I'm sick about it. And I think about the impact for every child in this country, Indigenous or people of colour, and how it impacts them personally. It does harm. It's racist,” she said.

Philpott, who is running in Markham-Stouffville, earlier became emotional while delivering a speech urging the federal government to fund a health centre for people suffering from mercury poisoning in Grassy Narrows First Nation in northern Ontario.

She said it's important to call out racism and understand the systemic roots beneath it.

“I think we should expect the highest levels of integrity from our leaders and that means that nothing should be hidden from us, certainly not for a long period of time,” she said.