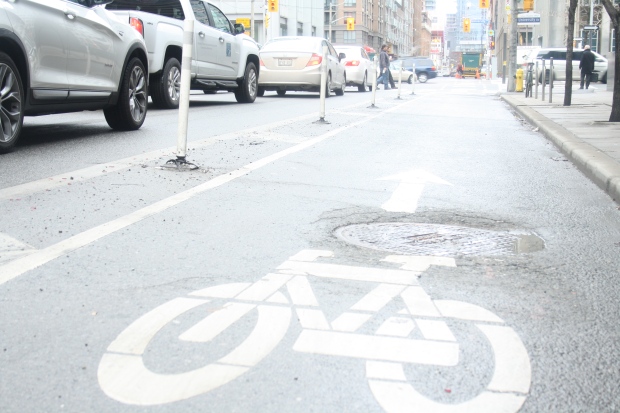 A bike lane is shown in this file photo. (Chris Fox/CP24.com)

Construction has begun on a new bike lane along Danforth Avenue.

Once complete, it will run from Dawes Road to Broadview Avenue, at which point it will connect with the existing bike lane along Bloor Street.

It is part of a major expansion of the city’s bike lane network that the city accelerated due to the COVID-19 pandemic.

As part of that initiative the city is installing 25 kilometres of additional dedicated cycle lanes this summer, including one along University Avenue that was put in last month.

Staff say that they are using mostly “temporary materials” in order to install the lanes rapidly with “minimal change to the street design,” though in the case of Danforth Avenue a more substantial overhaul is being undertaken with the city spending an additional $1.5 million on public realm improvements.

At this point, it remains unclear when the project will be completed.

The city is spending about $3 million on the new bike lanes with most of them expected to be installed by the end of this summer.