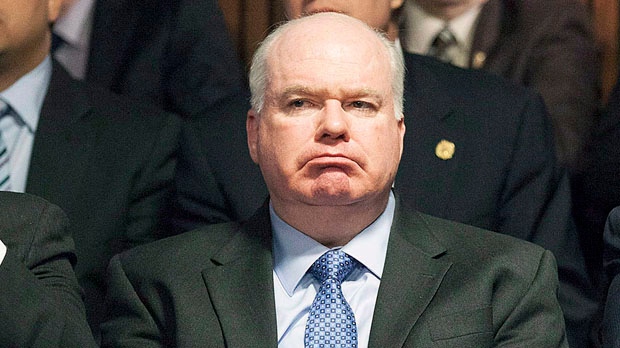 Ontario official opposition house leader Jim Wilson listens as the Ontario Power Authority executives answer questions regarding the additional documents that were uncovered related to the controversial cancellation of gas plants during a press conference in Toronto on Thursday, Feb. 21, 2013. (The Canadian Press/Michelle Siu)

Wilson, who held the health and energy portfolios in the cabinet of former premier Mike Harris, was elected interim leader by the reduced PC caucus, replacing Tim Hudak who led the party to defeat in the last two elections.

Hudak's pledge during the campaign for the June 12 election to cut 100,000 public sector jobs was a key reason the Tories lost nine seats, Wilson told reporters.

"We have to go back to earning the trust of the people of Ontario, and let's not be attacking people," he said.

"We've been attacking people for a decade. In my heart, and in my caucus colleague's hearts, we're not that type of people. We like everybody."

The PC caucus members say Hudak is not solely to blame for the election loss, but agree the job cuts promise to help eliminate a $12.5 billion deficit in two years was announced without proper consultation, said Wilson.

Hudak supporters say caucus members were told before the election that public sector job cuts would be part of the party's platform, but Wilson said Tory candidates had no idea the leader was planning such a controversial announcement.

"Certainly we were all caught off (guard) with the 100,000 person job cuts announcement in the campaign, and that was unfairly thrust upon caucus and on our candidates and we can't do that again," he said.

"I think clearly we shot ourselves in the foot in the last election, and we've got to stop doing that."

Ottawa-area MPP Lisa MacLeod, who is considering a leadership bid, agreed the Conservatives need to change a tactic that has not proven a hit with voters.

"Our tone is undeniably something that came up during the campaign, and I think that has caused a lot of reflection internally within our party and our caucus, and I think that we're looking for fresh leadership and a fresh approach," she said.

The party has a lot of rebuilding to do and a new leader may face a very long road to government, added MacLeod.

"It's going to take a plan for the next eight to 12 years, and I think that's going to be on the forefront of people's minds," she said.

Wilson said the party would take steps to give caucus members more of a voice in policy matters, including campaign platform strategies. Conservatives were asked to sell unpopular policies they didn't always believe in, he added.

"Really no criticism of past leaders, but we've had a period of about a decade where caucus has felt badly disenfranchised," said Wilson.

"While I'm not going down any great policy trail -- that will be up to the real leader of the party -- certainly we're going to start a new process in caucus where they're very much listened to."

The PC executive will meet Saturday and could decide on a date for a leadership convention, which Wilson said he'd like to see sooner rather than later.

So far, deputy PC Leader Christine Elliott -- the widow of former finance minister Jim Flaherty -- is the only declared candidate, but London-area MPP Monte McNaughton said Wednesday he was seriously considering entering the race, as did MacLeod.

"I'm flattered and I'm very interested in what people are talking about," said MacLeod of the support for her leadership bid.