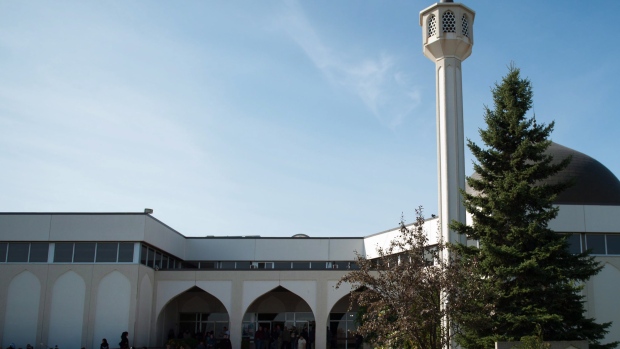 The Al Rashid mosque in Edmonton is shown on Saturday, September 22, 2012. The Al Rashid Mosque has stood in Edmonton, Alta., since 1938, but no one there today can remember ever hearing the daily call to prayer ring out over the loudspeakers. THE CANADIAN PRESS/Ian Jackson

OTTAWA - The Al Rashid Mosque has stood in Edmonton since 1938, but no one there today can remember ever hearing the daily call to prayer ring out through the loudspeakers.

Usually, the musical chant that ushers Muslims into their house of worship for prayer is prohibited under city noise bylaws.

But across Canada, cities are allowing the call, or adhan, during the COVID-19 crisis, during the Muslim holy month of Ramadan.

Ottawa, Toronto, Hamilton, London, Edmonton, Calgary, Vancouver and other major cities have all made exemptions to the usual rules.

The Al Rashid, Canada's oldest mosque, livestreams the call online every evening for thousands of people who cannot be there in person.

Some parents have been bringing their children to stand outside the mosque at sundown to hear the call and share the experience they never expected to pass on in Canada.

Some who worship there grew up in countries where Islam is the dominant religion. For them, the sound transports them back to their own childhood, where the adhan was heard ringing through local neighbourhoods five times each day.

For some who grew up in Canada never hearing the adhan in their communities, the experience has been transformative.

“Being able to break their fast on the sound of the prayer, it was a big moment they will not forget, I'm sure,” said Noor Al-Henedy, who works for the mosque.

Ramadan is a month-long period dedicated to prayer, reflection and charity, underscored by the practice of abstaining from food and water during the day.

While Muslim Canadians have endured the same hardships as the rest of the country during the COVID-19 crisis, including job losses and isolation, the pandemic has provided an even greater opportunity to reflect on life's priorities and put others first.

“This Ramadan in particular took everybody to the root of what Ramadan really is,” Al-Henedy said.

“To really be able to reflect well on yourself while fasting, to look around you and appreciate the blessings that you have, to understand the struggle that many people are going through ... is really important.”

Hearing the call to prayer outside the mosque has emphasized that, she said.

“It's really comforting,” said Sahar Zimmo, who has heard the adhan before while travelling in other countries, but has now heard it in her hometown of London, Ont., for the first time.

The London Muslim Mosque was built in 1964, making it Ontario's oldest Muslim house of worship.

“To actually hear the call to prayer, it gave me a sense of hope, a sense of relief at a time when things are up in the air and not normal,” she said.

Allowing the call to prayer in Canadian cities hasn't been totally without backlash, but Zimmo said neighbours in London have been supportive.

At a time when everyone is isolated from one another, being able to share a part of her community and faith with the rest of her city is heartening.

“It just gives us hope that better times are coming, it gives us a sense of togetherness and a sense of unity that we're all kind of in this struggle together,” she said.

In Ottawa, the call to prayer was sung from the minaret of the Ottawa Mosque for the first time in its history on May 2, and has continued every night since.

On Thursday evening, a handful of Muslim families in cars lined up down the street to listen. Mothers wearing hijabs stood outside holding babies and toddlers. But neighbours and passersby on bicycles also paused to listen.

“It's emotional,” said Judy Hamwi, 23, whose Lebanese family travelled from Orleans, in the eastern area of Ottawa, to hear the call for the first time in their Canadian home.

“It's something special, and it means a lot to us. We're grateful for that.”

Imam Muhammad Sulaiman, the mosque's spiritual leader, stepped out of the building at the end of the adhan with a cup of water in his hand to greet the onlookers and signal it was time to break the fast. Families started digging into the elaborate suppers they packed in their cars.

On any other evening during Ramadan, he would have welcomed them into the mosque to enjoy their meals together. But this year, when people can share in little else together, at least they can share this experience.