'It has been an exciting day in my life,' Hazel McCallion says as she celebrates 100th birthday

On Sunday morning, the centenarian was greeted by students and parents from Philopateer Christian College who hosted a birthday drive-by at McCallion’s Mississauga residence.

The group dropped off cards, signs, a pink birthday cake and a big birthday banner in celebration of McCallion’s big day, while wearing masks and attempting to physical distance amid the COVID-19 pandemic. 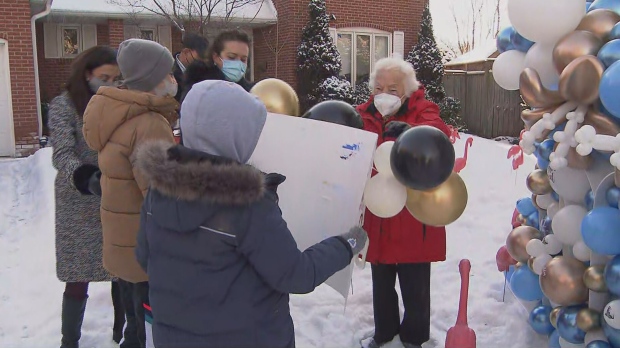 McCallion said the outdoor gathering was a special treat on her Valentine’s Day birthday.

“This means so much. In fact, I surely did not expect anything like this. I thought, 100th birthday, I was 99 last year. I thought, oh another 100th [birthday celebration] so what? But it's been really wonderful,” she told CP24 Sunday afternoon outside of her home.

“It's just been such an exciting day in my life. I certainly wouldn't forget it.”

Staff and students from the school celebrate McCallion’s birthday every year to honour and recognize the iconic politician.

“Hazel McCallion is one great leader. A great woman leader and the one that knew how to stand up for all is right and to lead a great city like Mississauga,” Phoebe Wasfi, principal of Philopateer Christian College, said.

“Bringing the students and getting them to see a Canadian hero who’s celebrating such a great milestone, her 100th birthday, is very important for us,” she added.

Yesterday, Mississauga mayor Bonnie Crombie, along with first responders, participated in a drive-by outside of McCallion’s home and dropped off a giant 100th birthday ice sculpture which currently sits on her front lawn. 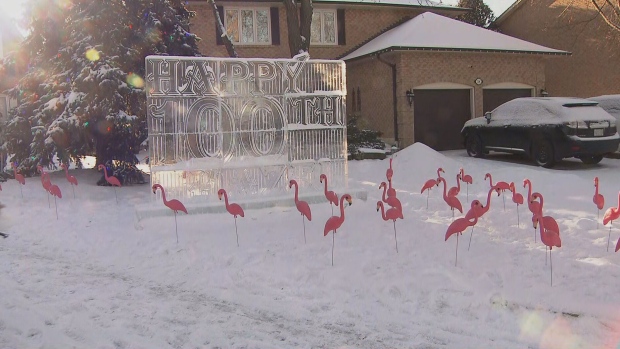 Celebratory pink flamingos and birthday signs can also be seen scattered outside of her property.

As turning 100 years old is a significant milestone, McCallion said she feels no different than she did yesterday.

“I feel great. I don't feel that I'm 100, it’s no different than yesterday, really. But it's been a very exciting day with all the many people and the students that came to wish me a happy 100th birthday. It was just amazing, the response that I've received,” she said.

McCallion, who has been nicknamed “Hurricane Hazel” for her outspoken political style, ended her 36-year reign as Mississauga's mayor in 2014.

Although it has been six years since she left politics, McCallion said she is keeping busy by participating on several boards, including Revera, which owns and operates long-term care and retirement facilities across the country.

“Since I retired in 2014, I'm on a number of boards and all our meetings are by Zoom. And I contribute to the organizations that want me to support them in the city,” she said.

“I've done a lot of videos in my backyard this year for worthy causes in Mississauga. And so I'm very happy to be involved, and that they want me involved,” she added.

Despite the world enduring a pandemic for almost a year, McCallion remains optimistic and positive about the future.

“You just have to take every day each day by day. I get up in the morning and I get up with a positive attitude, which I think is a lot. We've got to be positive today and due to the pandemic because it is so negative. All the news is negative saying how many people have been affected by this terrible virus,” she said.

McCallion also urged people to obey public health recommendations because “only the people” can overcome and solve the virus.

As McCallion reflected on her legacy, she said she hopes she will be remembered for providing necessary resources for the people of Mississauga.

“Well, [ I want to be] remembered for building a city. Not alone, [I had] great staff, great counselors, and I hope they remember me for the many facilities that we've provided in the city for people. Because my motto when I ran as mayor of Streetsville and mayor of Mississauga, I always said planning and development for [the] people.”