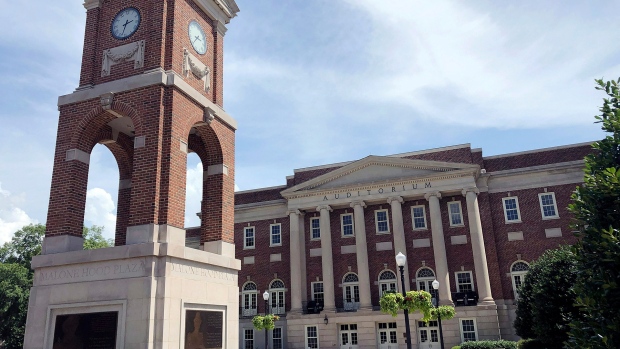 In this June 16, 2019 file photo, the Autherine Lucy Clock Tower at the Malone Hood Plaza stands in front of Foster Auditorium on the University of Alabama campus in Tuscaloosa, Ala. (AP Photo/Bill Sikes, File)

TUSCALOOSA, Ala. -- Several college students in an Alabama city organized “COVID-19” parties as a contest to see who would get the virus first, officials said.

McKinstry said party organizers purposely invited guests who tested positive for COVID-19. She said the students put money in a pot and whoever got COVID first would get the cash.

“It makes no sense,” McKinstry said. “They're intentionally doing it.”

“Not only do the doctors' offices confirm it but the state confirmed they also had the same information,” Smith said.

Tuscaloosa is home to The University of Alabama and several other colleges.

For most people, the new coronavirus causes mild or moderate symptoms, such as fever and cough that clear up in two to three weeks. For some, especially older adults and those with existing health problems, it can cause more severe illness and even be fatal.