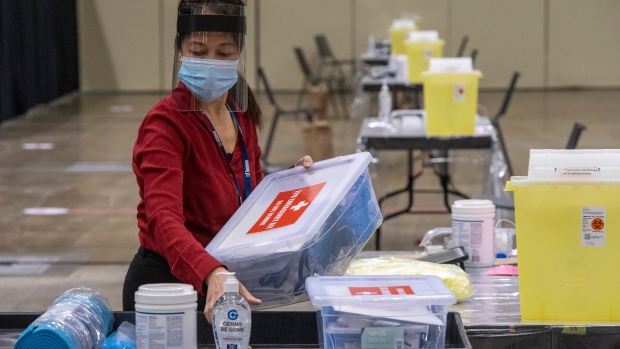 People without a valid Ontario health card have been excluded from booking an appointment at any of Toronto’s mass vaccination clinics for the time being, a situation that at least one public health expert says is a barrier to access that we “just cannot afford” right now.

Toronto’s Associate Medical Officer of Health Dr. Vinita Dubey has confirmed to CP24.com that agents at the provincial call centre are refusing to allow people without health cards to book an appointment to receive a COVID-19 vaccine at mass vaccination clinics, even though there has been no such requirement put in place by Toronto Public Health.

Dubey said that Toronto Public Health is “working with its health sector partners to develop a low barrier process to support people without OHIP cards to get the COVID-19 vaccine in Toronto” but that process may not be in place until mid-April.

In the meantime, people without a current health card have been effectively shut out from COVID-19 vaccinations at city-run clinics, even as the city sometimes struggles to fill the thousands of open slots available each week.

“I think it is a significant barrier. The focus needs to be on getting out to marginalized populations and people living in high-risk neighbourhoods so we need to remove every barrier possible and requiring an OHIP card can pose a significant challenge for many, many people and that is the people we need to be getting out to,” Dr. Andrew Boozary, who is the executive director of social medicine at the University Health Network, told CP24.com on Tuesday afternoon. “These are real barriers and we just cannot afford any of them right now as we are in such a race to save lives and I think that the reality is that trying to ensure these barriers were removed from the outset has not happened so it really needs to happen now if we are going to reach as many people as we need to.”

Toronto Public Health does not require that people have a current Ontario health card to receive a flu shot at the dozens of clinics it runs each fall and winter.

But because it is relying on the provincial booking website and call centre to fill the slots at its COVID-19 vaccination clinics, it has been unable to offer those people a workaround to book appointments so far.

Dubey told CP24.com that residents without health cards will eventually be able to book appointments using other government-issued identification, including non-Canadian and expired documents but conceded that those plans are still being “finalized.”

That, in turn, has upset some advocates for migrant workers who have been pushing to ensure access to vaccines for undocumented individuals since earlier this year.

“It should have been addressed months ago. We have been talking to them (other levels of government) about vaccine access since January; it is now April. So there has been months and months and months of time to create better policy,” Syed Hussan, who is the executive director of the Migrant Workers Alliance for Change, told CP24.com on Tuesday. “At the end of the day it is clear that the people who are making policies about what happens to most of us actually don’t live in our community and actually don’t understand who lives here. We are a city that is primarily racialized, low-wage, working class people, many of them without status. That is what Toronto is. But the people making decisions; that is not their Toronto.”

Hussan said that there are approximately 500,000 undocumented people in the GTA who have been effectively shut off from accessing COVID-19 vaccinations due to the fact that they do not have a health card.

He acknowledged that the city is working on a solution but said that he is worried “that by the time they get their act together it may be too late.”

Boozary, meanwhile, said that he is hopeful that the problem is just a “glitch” that can be resolved soon before it further “widens the divide” already faced by some vulnerable groups as a result of COVID-19.

His comments come as the Toronto-based research group ICES publishes new data which reveals that residents in Moore Park are nearly four times as likely to have recieved at least one dose of COVID-19 vaccine than those in the Jane and Finch area.

“When you talk about a health equity approach that means removing the barriers that are invisible to the general population but are incredibly burdensome for people who have been doing all of the heavy lifting throughout the pandemic,” Boozary said.