The Blue Jays say they will not be serving beer in cans at the Rogers Centre for the remainder of the postseason after a can was chucked on to the field during the wild-card game last week.

In a statement released by the Blue Jays Sunday morning, the organization confirmed the change in policy.

“Enhanced security and alcohol management measures will be in place to provide our fans, staff and players with a safe and enjoyable atmosphere. As such, all beer will be poured into cups throughout the stadium for the remainder of the Postseason,” the statement read.

The ban comes after a beer can came whizzing by Baltimore Orioles' outfielder Hyun Soo Kim while he attempted to catch a fly ball during the seventh inning of the wild-card game at the Rogers Centre on Tuesday.

Following the incident, police identified the man who they believe tossed the can on to the field and he has now been charged with mischief.

This is not the first time the Jays have restricted the way beer is served during the playoffs.

Last year in Game 3 of the team's series against Kansas City, fans in 500 level seats were forced to drink out of plastic cups as well. 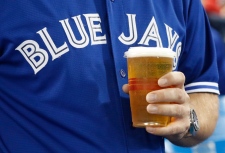 A man holds a beer in a plastic cup before the Toronto Blue Jays play the Texas Rangers play in American League Division Series action in Toronto on Sunday, October 9, 2016. THE CANADIAN PRESS/Mark Blinch

Baltimore Orioles' Hyun Soo Kim gets under a fly ball as a beer can sails past him during seventh inning American League wild-card game action against the Toronto Blue Jays in Toronto, Tuesday, Oct. 4, 2016. (THE CANADIAN PRESS/Mark Blinch)