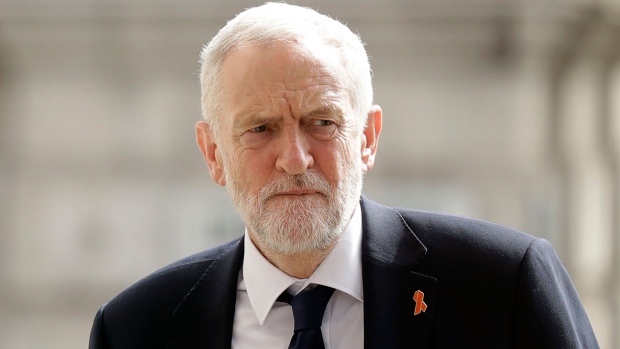 The planned livestream talk risks pulling New Democrats in a direction “antithetical” to Canadian values, said Shimon Fogel, head of the Toronto-based Centre for Israel and Jewish Affairs, in a joint statement with the Board of Deputies of British Jews.

“It is staggering that given the litany of catastrophic, consequential issues before us, including the pandemic, that this is where some in the NDP want to spend the party's capital.”

The British Labour party has been grappling with allegations that anti-Semitism was allowed to fester under Corbyn, a longtime supporter of Palestinians and a critic of Israel who led the party for almost five years from 2015.

The Labour party suspended Corbyn in October after he said the problem of anti-Semitism in the party had been “dramatically overstated” for political reasons. He was readmitted as a party member in November after walking back those comments, but remains an Independent MP after his successor Sir Keir Starmer refused to let him back into the fold.

Ashton has been promoting on social media their March 20 chat, an online fundraiser for Progressive International. The organization, which is hosting the event, was launched in 2018 by U.S. Sen. Bernie Sanders, Canadian author Naomi Klein and other progressive politicians and activists.

Ashton did not make herself available for an interview Wednesday. She sent a statement in response to questions from The Canadian Press about the event and the criticism.

“Progressive International is a global network of progressives committed to fighting against the rise of the far right, growing inequality and the threat of the climate catastrophe,” Ashton said in the emailed statement.

She said she is participating in the two-hour talk as one of the organization council's Canadian members, who also include Klein and activist Avi Lewis.

Ashton said she plans to discuss a variety of current events “and how to build international solidarity with former Labour leader Jeremy Corbyn, who has fought for peace and justice and against racism of all forms throughout his life.”

The NDP said in an email the party and its leader, Jagmeet Singh, are committed to fighting anti-Semitism amid a troubling rise in hateful ideologies.

“New Democrats have been working with organizations to dismantle hate and alt-right groups and proposing solutions to fight against online hate to keep communities safe,” the party said Wednesday.

“Jagmeet and New Democrats are committed to fighting anti-Semitism and will continue to push the Liberals to take more concrete actions, like attacking online hate, to combat it.”

In October, a report from the U.K. Equality and Human Rights Commission found “serious failings in leadership” and an inadequate process for handling anti-Semitism complaints under Corbyn's tenure, concluding that the Labour party was responsible for “unlawful acts of harassment and discrimination.”

“Our analysis points to a culture within the party which, at best, did not do enough to prevent anti-Semitism and, at worst, could be seen to accept it.”

The report was cited Tuesday by Rick Smith, executive director of the Broadbent Institute, which shares links with the New Democrats, when he criticized the event.

“This is not the sort of person that should headline a progressive fundraiser or occupy the time of Canadian progressive leaders,” Smith said of Corbyn in a Twitter post Tuesday.

Smith linked to a post from former NDP MP Svend Robinson, who said he would be joining Ashton and Corbyn for the event.

Richard Marceau, general counsel for the Centre for Israel and Jewish Affairs, called the decision to feature Corbyn at a Progressive International fundraiser “mind-boggling.”

“To me it betrays true progressive values. Those people would never, ever invite people who have been condemned for anti-Black racism, anti-Indigenous racism, homophobia, etc. And yet Niki Ashton is lending her name to a person who is peddling anti-Semitic tropes,” said Marceau, a former Bloc Quebecois MP, in an interview.

“This is not, I believe, the progressive movement that Canada needs or wants.”

Progressive International did not respond to a request for comment Wednesday.

- With a file from The Associated Press