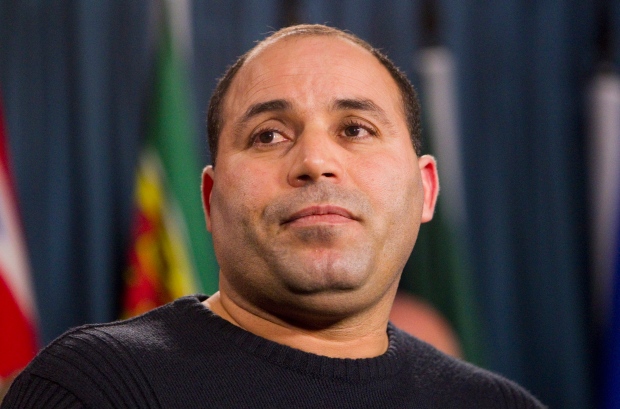 OTTAWA -- A judge has granted terror suspect Mohamed Harkat more freedom -- though not as much as he asked for.

In a judgment made public Wednesday, Federal Court Justice Sylvie Roussel gave Harkat permission to travel anywhere in Ontario or Quebec for 72 hours without notifying authorities.

The Algerian refugee -- who faces deportation on national security grounds -- can also report to officials in person just once a month, not every two weeks.

Roussel denied Harkat permission to have a laptop computer with internet capability for personal use outside his home. But she opened the door to the possibility of internet access for employment purposes.

Overall, the judge found the existing release conditions were "disproportionate with the danger posed by Mr. Harkat" and that they should be relaxed.

Harkat's wife, Sophie, expressed disappointment with the ruling, saying the hurdles set out for internet use at work could scare prospective employers away.

At a two-day hearing in November, Harkat asked the court to impose less strict monitoring of his everyday activities by the Canada Border Services Agency as he awaits the outcome of his extended legal saga.

Harkat, 49, was arrested in Ottawa in December 2002 on suspicion of being an al-Qaida sleeper agent. He denies any involvement in terrorism.

The federal government is trying to deport the former gas-station attendant using a national security certificate -- a legal tool for removing non-citizens suspected of ties to extremism or espionage. Harkat fears he will be tortured if returned to his Algerian homeland.

Following his arrest, Harkat was locked up for more than three years. He was released in June 2006 under stringent conditions that have gradually been eased.

At home with Sophie, Harkat has access to a computer connected to the internet. Prior to Wednesday's ruling, he was required to report in person to the border agency every two weeks. And, though Harkat could travel within Canada, he had to provide the border agency with five days' notice of his plans as well as a full itinerary when leaving the national capital. He also had to report to the border agency by phone once a day while travelling.

Harkat's submission to the court said he "presents no threat to Canada or to any person" and that he has diligently complied with requirements. "A continuation of these conditions is not justified."

The couple said the restrictions had caused great stress and hardship.

Harkat works part-time as a church custodian. But Sophie testified the limitations on computer use have denied her husband opportunities to be a retail cashier or parcel courier.

Roussel said if Harkat is to fully embrace the values of his adopted country, it is "important that he be given the opportunity to obtain gainful employment."

She instructed Harkat and the border agency to discuss the sort of internet-linked devices he could use at work. The agency would approve or reject specific proposals, with the court having final say in a disagreement. Harkat's employer would be obliged to report any unauthorized internet use to the agency.

Sophie Harkat said Wednesday the conditions mean her husband "will continue to be dehumanized around his employers," adding the couple could be forced into further costly court proceedings.

Roussel said she didn't have sufficient evidence of Harkat's need for personal internet use outside the home.

She also turned down Harkat's request that he be allowed to travel anywhere in Canada without restriction.

Border services officers have followed the couple on trips to a cottage and to the funeral of Sophie's grandmother.

Roussel expressed concern about the "degree of intrusiveness" of the border agency's physical surveillance, saying there should be better guidance on when and how it is done.

Meanwhile, the border agency is in the process of seeking a "danger opinion" as a step toward deportation.

A delegate of the immigration minister will determine whether Harkat poses a danger to national security and, if so, whether the risk to Harkat of removing him outweighs the danger or severity of the acts he allegedly committed.