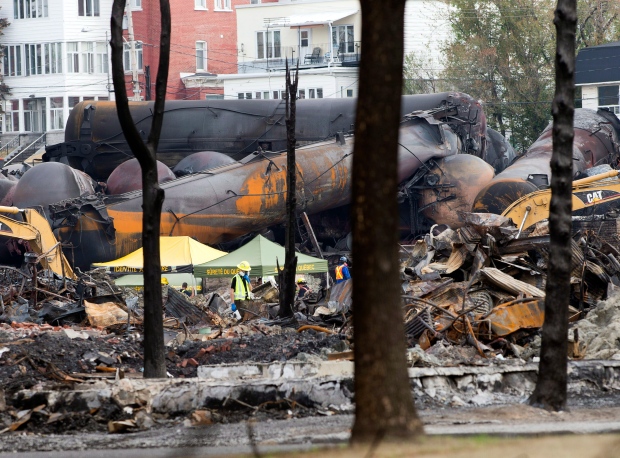 Work continues at the crash site of the train derailment and fire on Tuesday, July 16, 201, in Lac-Megantic, Que. (The Canadian Press/Ryan Remiorz)

MONTREAL -- Survivors of the Lac-Megantic disaster aim to sue Ottawa for allegedly failing to sanction North America's "most-unsafe" railway operator -- a company whose highly explosive cargo wiped out part of their town.

The July 6 tragedy set off an international debate on rail safety and has led to numerous investigations, regulatory changes and lawsuits, including proposed class-action cases on both sides of the border.

One of those class-action suits now seeks to expand its long list of defendants to include the federal government.

The Attorney General of Canada was named in an amendment filed Wednesday in a Quebec courthouse. The document states it was included because it delegates regulatory powers to the Canadian Transportation Agency and Transport Canada.

The motion alleges Transport Canada failed to adequately sanction the Montreal, Maine & Atlantic Railway -- the company at the centre of the disaster -- even though the department was aware of the company's repeated violations.

"(Transport Canada) failed to take appropriate measures to ensure safe and secure operations by MMA Canada and it is therefore responsible to the class members as a result of its laxity in this regard," reads the document presented by lead lawyer Daniel Larochelle, whose Lac-Megantic office was destroyed in the disaster.

The amendment also says the Transportation Safety Board found the MMA has been involved in at least 129 accidents in Canada since 2003, an amount the plaintiffs allege make it the "most-unsafe railway operator in North America."

"(Transport Canada) was clearly deficient and grossly negligent in its oversight role as it has failed to establish any effective or sustainable oversight approach in the face of MMA Canada's open non-compliance with its regulations," the motion said.

"As a result, TC failed to provide a minimum level of assurance that MMA Canada was operating safely."

Among the other allegations in the document:

-- Transport Canada failed to prevent the MMA from transporting shale liquids despite what it calls its "dubious history" and the "deplorable condition" of some of its tracks.

-- Transport Canada ignored red flags by permitting the railway to use a single operator on its trains in some areas.

-- Transport Canada was aware the MMA's train drivers had failed, in the past, to apply a sufficient number of brakes on unattended trains.

A judge has been asked to decide at a hearing next week whether to approve the request to list the federal government among the defendants, a lawyer involved in the case said Thursday.

Meanwhile, the class-action itself is still in its preliminary stages, but could be authorized by a judge as early as June, Montreal attorney Jeff Orenstein said.

He said the legal team decided to target Ottawa in part because of findings in a rail-safety report released last fall by the auditor general. The audit, made public in November, had been completed just days before the Lac-Megantic crash.

That report, which explicitly stated it made no assessment of the disaster, found "significant weaknesses" in Transport Canada's oversight of federally regulated railways.

The audit said the weaknesses include a lack of knowledge of railroads used to transport dangerous goods, too few safety auditors, poorly trained inspectors and an absence of follow-up or sanctions when safety problems are found.

On Thursday, a spokeswoman for Transport Minister Lisa Raitt declined to comment on the allegations, saying it would be inappropriate since the case is before the courts.

Raitt did, however, defend her department Thursday during Question Period as she responded to NDP queries about the class-action suit and the beleaguered railway.

"With respect to the difficulties with MMA and its non-compliance with the rules, this is exactly why last year we brought in the ability to administer fines," Raitt said.

"Before then, it simply did not exist."

The tanker train that smashed into Lac-Megantic had a single operator when it was parked uphill from town the night of the derailment.

New federal directives also include a regulation that says locomotives attached to one or more tank cars loaded with dangerous materials can no longer be left unattended on a main track.

Last month, amid concerns over the fragility of older-model rail tankers, Raitt promised the government will formalize the standard for new tank-car construction adopted by the industry in October 2011.

The class-action lawyers say rules were in place before the derailment, but allege the government was too lax when it came to sanctioning its own regulations.

Orenstein, however, acknowledged how difficult it would be to win a lawsuit against the government.

"It starts off with the premise saying, 'the King can do no wrong,' meaning that the government is immune from liability and it's only if they fall under something specific that they could be liable," he said.

"The concept of laxity would be something specific."

The class-action was first registered in July and targets numerous defendants, including the MMA, its chairman Ed Burkhardt, train driver Tom Harding and companies allegedly responsible for the crude oil aboard the train.

The amendment filed Wednesday was introduced the same week Ottawa agreed to lift the ceiling on how much cash it will pay toward the decontamination and reconstruction in Lac-Megantic, where millions of litres of crude spewed from the train into the soil and nearby water bodies.

The work is expected to cost more than $400 million.

Under the agreement, the federal government would split the costs with Quebec.

It's too early to determine the derailment's overall price tag, which could soar as law firms in Canada and the United States try to take a piece of potentially lucrative lawsuits.

Orenstein's class-action, which does not mention a financial sum, seeks damages for loved ones of the dead, for those who were injured and for property and business losses.

He said he has a ballpark idea of how much the group would seek, but he declined to disclose a specific amount until a later date.

"Are we talking about many millions?" Orenstein said. "Absolutely."