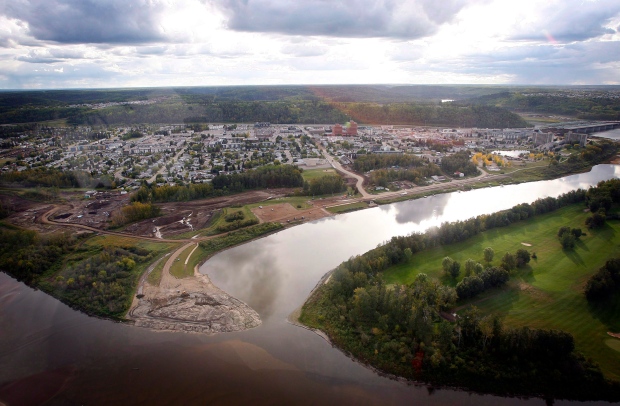 The city at the heart of Canada's oilsands is no ghost town, but things have slowed down a bit in Fort McMurray, Alta. An aerial view of Fort McMurray is shown in this Monday, Sept. 19, 2011 photo. (Jeff McIntosh/The Canadian Press)

More than two dozen laid off oil field workers are finally on their way home after being stranded for days at a remote worksite in northern Alberta.

CTV News has learned that about 25 employees at an isolated Canadian Natural Resources Limited's (CNRL) Horizon site located about 160 kilometres north of Fort McMurray were left waiting for chartered buses after getting laid off Tuesday evening. Their contractor, Pacer Promec Energy Corporation (PPEC), told employees that the company had gone into receivership.

Workers were waiting for buses to transport them to a private CNRL airstrip for chartered flights home. However, the buses never showed up and the workers were told to find their own way home despite travel to and from the worksite being covered in their contracts, a worker who did not want to be identified told CTV News.

“CNRL is telling [PPEC] ‘No, we’re not providing you guys any way home, cover your own employee’s cost’.”

A CTV news station in Edmonton called PPEC Wednesday but calls went straight to a recorded message about the company’s receivership status and company offices in Calgary appeared empty.

On Thursday, a PPEC human resources representative told CTV News the company will now cover the cost of the workers' flights and CNRL will arrange a charter flight to at least get employees to Fort McMurray.