A man who allegedly slashed two uniformed Canadian Forces members at a military recruitment office in North York and then claimed that Allah told him to do it will seek bail, according to his lawyer.

The 27-year-old suspect appeared in court at Finch Avenue West on Tuesday afternoon but was remanded into custody until Friday after the Crown requested a three-day stay of the proceedings for investigative purposes.

Speaking with reporters outside the courthouse, Lawyer David Burke said his client will seek bail, possibly as early as his next court appearance on Friday.

“If we have appropriate sureties in place he will seek bail,” he said. “This gentleman is not going to be let out on bail for anything but the best of plans. Anyone familiar with the legal system would tell you that. This is a very, very difficult situation he finds himself in.”

Police investigating whether stabbing was act of terrorism

The suspect, who was born in Montreal and moved to Toronto five years ago, walked into the office on Yonge Street near Greenfield Avenue at around 3 p.m. on Monday.

Once inside, police allege the suspect walked past a master corporal who was stationed at the door of the office and then slashed him on his right arm with a “large knife” when he tried to stop him.

The suspect then continued into the office and allegedly attempted to slash a female uniformed Canadian Forces member, who escaped injury.

Military personnel were then able to corral civilian applicants in a safe location and subdue the man until police arrived.

According to court documents, the victims have been identified as Ryan Kong, Jesus Castillo and Tracy Ann Gerhardt.

“There was a lot of soldiers doing a lot of good work and putting themselves in harm’s way in order to make sure the civilians and personnel there were taken care of,” Capt. Jean-Michel Gidlow told CTV News on Tuesday. “There were a lot of moving parts. Soldiers were jumping out of their offices, dropping what they are doing and running to the assistance of the soldier that was being attacked.”

At this point a motive for the attack has not yet been determined but Police Chief Mark Saunders told reporters earlier in the day that he can’t rule out terrorism.

Saunders said the suspect reportedly uttered the words “Allah told me to do this. Allah told me to come here and kill people” at the scene, however it is not clear whether the words were uttered during or after the attack.

Provincial police, the Royal Canadian Mounted Police, and the Canadian Security Intelligence Service have all been notified.

“We are certainly looking into it and that is why we are working in concert with other agencies to determine exactly what is going on,” Saunders told reporters at police headquarters on Tuesday morning. “There has to be a lot of analysis done so we can have a full and proper picture on what exactly motivated this act.”

The suspect lives in a Toronto Community Housing townhouse on Albion Road in Rexdale with his mother and sister and is a “quiet guy” who mostly keeps to himself, one resident at the complex told CP24.

Another resident told CP24 that the suspect was someone who “would help everyone out,” especially elderly residents.

Beyond that few details have emerged.

Right now, Saunders said police are trying to find out more about the suspect, including whether he may have travelled to any foreign countries where he could have been radicalized.

The suspect has, however, been “unresponsive” to questioning so far, according to Saunders.

“Certain comments were made that would fit a profile but there needs to be more to support (that the stabbing was an act of terrorism). You can’t just do that based on one statement,” Saunders said. “Today there is nothing to indicate that the accused was working with anyone or acting in concert with any organization.”

“He just seems very scared right now and of course very, very, unhappy to be in the position he finds himself in,” he said. “I am not getting into whether he is remorseful or anything like that.”

Burke said he has not requested a psychiatric evaluation for his client at this point, however he said “it remains to be seen” whether that is an avenue he will pursue in the future.

Burke also refused to comment on what the suspect does for a living but said that he “seems like an intelligent young man.”

“This is a very serious incident, nobody can deny that but at the end of the day I think it does remain to be seen what kind of a person we are dealing with,” he said.

The two Canadian forces members who were injured in Monday’s attack have both been released from hospital and are now recuperating at home.

Speaking with reporters earlier on Tuesday, the commanding office of the recruitment centre said that it is largely “business as usual” today.

“They (members) are prepared to do their duties. Obviously it is not something we see on a daily basis but they are professional,” Major Richard Silva said.

Silva was asked whether the military was on any elevated alert leading up to Monday’s attack, however he refused to comment. He did, however, say that officials at the North York office “had not observed any unusual activities” in the days and weeks before the stabbing.

Meanwhile, in a statement issued late Tuesday afternoon Chief of the Defence Staff General Jonathan Vance said the Canadian Forces will “adapt force protection measures to ensure the ongoing safety of our personnel across Canada” but he did not reveal exactly what those measures are.

Vance then went on to thank the Canadian Forces members who “bravely detained the attacker” on Monday.

“I would like to express my sincerest gratitude to our members who bravely detained the attacker, effectively neutralizing the threat from further harming CFRC Toronto staff and applicants. Their courage in the face of adversity is to be commended,” he said. “It is a demonstration of the training they receive and their devotion to Canada.”

Ayanle Hassan Ali, 27, has been remanded into custody until his next court appearance on Friday.

Discussing the investigation earlier in the day, Saunders said officers are eager to speak with anyone who saw Ali yesterday or are otherwise aware of his activities. 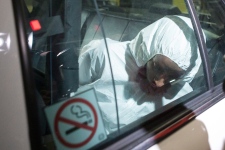 Ayanle Hassan Ali arrives in a police car at a Toronto court house on Tuesday, March 15, 2016. (The Canadian Press/Chris Young)