Legal cannabis supply will only meet 30 to 60 per cent of demand in Canada: study 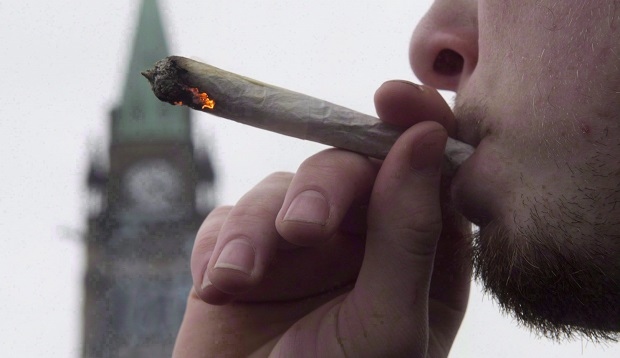 A man lights a marijuana joint as he participates in the 4/20 protest on Parliament Hill in Ottawa, April 20, 2015. (Adrian Wyld / THE CANADIAN PRESS)

TORONTO -- Canada's supply of legal cannabis at current production levels will meet just 30 to 60 per cent of total demand, according to a new analysis from a think-tank.

The estimated demand across the country is roughly 610.6 tonnes but the forecasted available marijuana supply in the fourth quarter of this year is just 146.13 tonnes, according to an upcoming report by the C.D. Howe Institute.

By the end of the first year of legalization, the amount of commercially produced legal cannabis will total about 210 tonnes, the authors said.

"The important policy conclusion is that there will not be enough legal supply, especially during the first half of the year following legalization, primarily because of the slow rate of licensing producers," wrote University of Waterloo economics professor Anindya Sen and C.D. Howe policy analyst Rosalie Wyonch.

The report to be released next week forecasts that there will be 97 licensed producers during the fourth quarter 2018, up from 45 during the first quarter but less than the 144 expected by the third quarter of 2019.

Canada is preparing to legalize cannabis for recreational use on Oct. 17, becoming the second country after Uruguay to do so. The total cannabis market in Canada, including medical, illegal as well as legal recreational products is expected to generate up to $7.17 billion in total sales in 2019, according to a recent Deloitte report. Of that amount, legal sales are expected to contribute more than half, up to $4.34 billion, in the first year, Deloitte added.

And although licensed medical marijuana producers have been ramping up production, concerns about product shortages have continued to loom.

The forecasted supply shortfall also has implications for government coffers, according to the report by the Toronto-based think tank. If the entire pot market were legally supplied and taxed, total revenues from excise and sales taxes would be $1.3 billion, but instead it will be about $490 million, the authors say.

"The estimated shortage of legal supply is associated with about $380 million in lost excise tax revenues and an additional $426 million loss in provincial and federal sales taxes," the report says.

However, the authors note that the shortage is likely "short-lived" as more producers are licensed and production capacities expand over time.

"There is also a possibility of legal supply meeting legal demand simply because many consumers choose the black market as their source of supply," the report says.

The report pegs the size of the black market, including legal supply shortages, at about 380 tonnes or at least $2.5 billion during the first year of legalization.

"Our results show that both pricing and supply shortages will contribute to maintaining the black market," the report said. "Resulting in lost tax revenues and a continued need to spend significant resources on law enforcement activities related to the market."