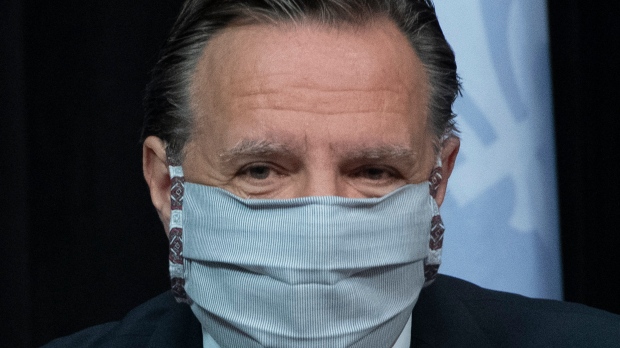 Quebec Premier Francois Legault arrives at a news conference on the COVID-19 pandemic wearing a mask, Tuesday, May 12, 2020 at the legislature in Quebec City. THE CANADIAN PRESS/Jacques Boissinot

MONTREAL - Quebecers were urged by the government Tuesday to wear masks when out in public - not to protect themselves, but to protect others.

Premier Francois Legault, his health minister and the public health director all donned masks as they entered a media briefing in Quebec City - the first time they have done so.

“A good way to greatly reduce the contagion is to wear a mask,” Legault said. “We strongly recommend that you do so.”

But Legault said the province won't make masks mandatory for now, unlike such places as France and New York State, where they are required while using public transit.

Legault said the government doesn't want to discriminate against those who are unable to buy or make their own masks. Legault also said it would be difficult legally to order that masks be worn, because they haven't been proven to be 100 per cent effective in stopping the spread of the virus.

But Montreal civil rights lawyer Julius Grey said the mask doesn't need to be perfectly effective to be made mandatory.

It is enough that the benefit be “reasonably probable” to gain an exemption under Section 1 of the Canadian Charter of Rights and Freedoms - which outlines a balance between the rights of the individual and the interests of society, he said.

Grey said forcing people to wear masks might infringe on individual rights but it would be considered a “reasonable limit” as long as the mask rules were not too draconian.

“It's only common sense,” Grey said. “These are charter rights, but they can be limited for something as serious as COVID.”

Grey noted that the Quebec government's own secularism law prohibits certain public servants deemed to be in positions of authority - including teachers, judges and police officers - from wearing religious symbols, such as turbans, kippas and hijabs.

“How is it they can prohibit the hijab, but they can't mandate and enforce the mask for public safety?” Grey asked with a laugh.

Grey noted that most physical distancing measures introduced since COVID-19 raise charter issues. He said that's likely to repeat when a vaccine for coronavirus emerges, given there are many opposed to vaccination despite the need to protect society as a whole.

Quebec's public health department last month began offering instructions for homemade masks. And last week, Montreal's transit authority announced it would distribute 600,000 masks in the coming weeks to transit users, saying they would not be obligatory because it wouldn't be able to enforce the rule.

“But when we make it mandatory, we will make sure that people who cannot afford them cannot be discriminated against compared to those who can,” Arruda told reporters.

Legault, who has been in Quebec City since the beginning of the pandemic, said he has heard of situations in hard-hit Montreal where physical distancing is difficult.

“I still have a lot of friends in Montreal who tell me that indeed, on the metro, the bus, in crowded stores, people are within two metres with no masks,” Legault said. “This is what convinced me this morning to put on a mask to come and see you, to send a strong message.”

The province announced an additional 118 COVID-19 deaths on Tuesday, bringing the provincial total to 3,131. Quebec has 39,225 confirmed cases.

The Montreal region is the hardest hit, with the city's public health director Dr. Mylene Drouin announcing it has seen nearly 20,000 confirmed cases and more than 2,000 deaths - 85 per of which were in long-term care homes and seniors' residences.

Of the Montreal cases, 3,743 are health-care workers, Drouin said.