Liberals move to block and remove asylum seekers with $1B plan 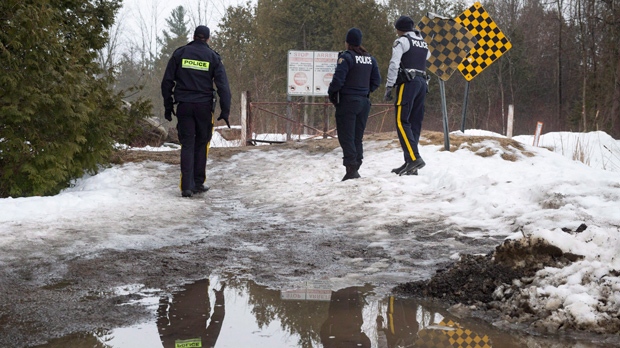 Three RCMP officers look over to the United States on the border with Canada where many asylum seekers have been crossing the United States, Tuesday, March 28, 2017 near Hemmingford, Que. THE CANADIAN PRESS/Paul Chiasson

OTTAWA -- The Liberal government is signalling its intent to stem the flow of asylum seekers crossing into Canada at unofficial entry points with a new border-enforcement strategy aimed at detecting, intercepting and removing irregular migrants.

A plan costing $1.18 billion over five years is promised in the 2019 federal budget to beef up border security and speed up the processing of asylum claims.

Canada wants to maintain its reputation as a fair and welcoming country, but one that is also governed by the rule of law, said Finance Minister Bill Morneau.

“We will invest in a comprehensive border enforcement strategy to better detect and intercept people who cross into Canada irregularly and those that attempt to exploit our immigration system,” Morneau said in his budget speech Tuesday.

The budget includes more money for the Canada Border Services Agency and the RCMP to strengthen security and law enforcement at the border.

New money will also be added to speed up processing of refugee claims, with a plan to complete 50,000 claims per year. The influx of irregular migrants, together with an overall increase in refugee claims in Canada, has led to a major backlog of claims at the Immigration and Refugee Board. New claimants are waiting up to two years to have their cases heard - unable to fully begin new lives in Canada if they're entitled to, or lingering in Canada longer than they should if they aren't.

A pilot project last year to streamline refugee cases at the pre-hearing stage will be expanded as part of the new measures announced Tuesday.

More than 40,000 asylum seekers have crossed into the country via the Canada-U.S. border “irregularly” since 2017 - avoiding official border checkpoints where they would have been turned back to the U.S. under the Safe Third Country agreement between the two countries.

The numbers have sparked calls for Canada to suspend or amend the agreement as a way to stop the flow of irregular migrants. The Conservatives regularly blame the influx of irregular migrants on Prime Minister Justin Trudeau, pointing to a tweet he published in early 2017 welcoming refugees to Canada.

Immigration is promising to be a key issue in the upcoming federal election, with some provinces - notably Quebec and Ontario - calling on Ottawa to provide them with hundreds of millions of dollars for housing and social-services costs they estimate they've incurred as a result of the increase in refugees.

While no money is earmarked in the budget for provincial immigration costs, new spending has been set aside for a new anti-racism strategy.

“Around the world, ultranationalist movements have emerged. In Canada, those groups are unfairly targeting new Canadians, racialized individuals and religious minorities, threatening the peace and security and civility of the communities we call home,” the budget document says.

Ottawa plans to spend $45 million over three years, starting this year, on a new anti-racism secretariat. Details of the work of this new body are to be announced later, but it will include a strong focus on community-based projects.