Local tests for coronavirus are proof ‘the system is working:’ Toronto’s top doctor 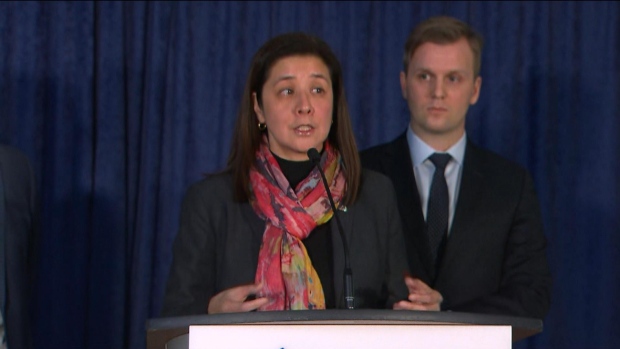 Toronto’s top doctor says the fact that some residents have been tested for the new coronavirus that has infected hundreds of people in China proves that “the system is working” and shouldn’t be a cause for alarm at this point.

Medical Officer of Health Dr. Eileen de Villa made the comment during a news conference alongside other public health officials on Friday morning.

She refused to reveal how many people have been tested for the virus locally so far but did point out that there have yet to be any confirmed cases in Canada and that the risk to residents locally remains “very low.”

“We expect to see that people will be tested and that should not come as a surprise. In fact that is the system at work,” she said. “When there are suspected cases what happens very briefly is that those individuals are assessed and then they are tested. But frankly this is what we do every day. It is core public health work and we fully anticipate that even if a case arrives that it will be business as usual.”

Chinese officials have reported 830 confirmed cases of the virus since it was first detected last month, including at least 25 fatalities. They have also said that they are investigating more than 1,000 suspected cases.

The rapid spread of the virus has led to some comparisons with the 2003 SARS outbreak that ultimately killed more than 800 people worldwide and dozens in Toronto, though officials have said that the situation is much different than it was back then with a quicker turnaround on lab tests and a better communication and coordination of resources among health agencies and medical professionals.

“I am glad to say the machinery is in place and it is working lightyears ahead of what we faced back in 2003,” Ontario’s Chief Medical Officer of Health Dr. David Williams said on Friday. “We learned lessons, we grew through that and we have had practice through Ebola, through H1NI and through MERS. Ontario is ready, our systems are ready.”

During the 2003 SARS crisis, the Chinese government faced criticism from the World Health Organization, among others, for attempting to conceal the scale of the outbreak.

Williams, however, said on Friday that the Chinese government has been “most forthcoming” this time around, giving public health agencies a running start as they ready their response to the virus.

The Chinese government has also taken the relatively unusual step of imposing travel restrictions on residents in 10 cities. Wuhan, a city of 11 million people where the virus is believed to have originated, has the strictest of those restrictions and is effectively under lockdown.

“They feel they can contain it to their setting and we have confidence that they will pursue that to the best of their abilities,” Williams said.

‘A matter of where and when’ virus comes to Ontario

So far confirmed cases of the virus have been recorded in at least nine countries with the U.S. having reported its first case earlier this week.

Williams said that at that it is probably a “matter of where and when” Ontario sees it first recorded case; not if.

In light of the threat posed, Ontario has made the virus reportable under health legislation so any medical professional who encounters a suspected case must contacted public health officials.

Williams said that most of the tests that have conducted so far have involved people who have “self-reported” after returning from China with flu-like symptoms.

“So far most of them came back with influenza or a common coronavirus,” he said. “I think the fact that we are seeing cases, and we will probably see more as doctors choose to investigate, that means our surveillance system is active, it is robust and it is timely and effective.”

The Public Health Agency of Canada has ordered that messaging be placed on arrival screens at airports in Toronto, Montreal and Vancouver to remind travellers to inform a border services officer if they are experiencing flu-like symptoms.

An additional health screening question has also been added to the electronic customs kiosks at those airports.

De Villa said that she and her colleagues at Toronto Public Health continue to “actively monitor” the situation but aren’t recommending that resident take any additional precautions at this time.

“My best advice to Torontonians is just to practice good respiratory hygiene. Get your flu vaccine on an annual basis, wash your hand, use alcohol-based hand sanitizer, cover your cough or sneeze and please do stay home if you are sick,” she said. “I would further say that if you become sick to the point that you require healthcare intervention to please let your healthcare provider know if there is a travel history.”

Officials say that the virus can be tested for through a throat and nasal swab with results taking up to 24 hours.