Longer lines, higher fares and no booze: Flying is about to get more aggravating 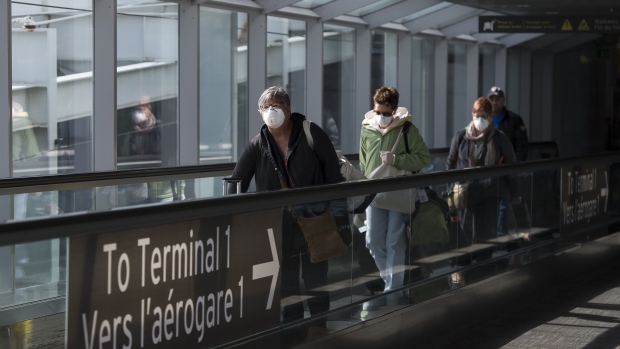 People leave the airport after arriving at Pearson International Airport in Toronto on Monday, March 16, 2020. Flying is about to get even more tedious. Temperature checks. Bigger lines. Fewer meals. No alcohol. And ultimately, higher prices. THE CANADIAN PRESS/Nathan Denette

Carriers, whose fleets have largely been grounded since mid-March amid global travel restrictions and extremely low demand for travel, now face the dilemma of generating enough revenue to stay afloat while keeping their passengers and employees safe.

In an effort to maintain physical distancing, Air Canada and WestJet Airlines Ltd. currently block the sale of immediately adjacent seats in economy class and throughout the entire plane, respectively.

To minimize customer-employee contact, pillows, blankets and alcohol are unavailable, with drink service limited to bottled water. Only travellers on international flights or in business class on journeys over two hours are offered boxed meals -- no multi-course meals on the menu, even for "elite" flyers.

Infrared temperature checks will soon be required for all international passengers as well as those flying within Canada, with screening stations to be set up at 15 airports by September, Transport Minister Marc Garneau said Friday.

Travellers with an elevated temperature -- 37.5 C in the case of Air Canada, which already conducts screenings -- will be unable to board the flight, and barred from flying for at least 14 days.

Just how effective the checks are at virus detection remains up in the air.

"Thermography is only good for people who have the beginnings of a fever, or are somewhere along with a fever," said Tim Sly, epidemiologist and professor emeritus at Ryerson University's School of Public Health. "But we now know this virus is a stealth virus."

A recent study at Imperial College London found that the technique would not detect a heightened temperature in about half of those with the virus.

Passengers, flight crew and airport workers must wear non-medical marks or face coverings at all times, with exceptions for eating that include dining and children under the age of two, according to Transport Canada.

Passengers seated in the back now typically board first and those in the front board last to reduce the risk of transmission.

Airports in Toronto, Montreal, Vancouver and Calgary are also encouraging a "touch-free" baggage check where travellers check in remotely, print bag tags at an airport kiosk and drop off luggage at a designated spot.

Physical distancing rules at busy terminals could shrink capacity and cause congestion for arrivals and departures, making it harder for carriers to recoup their recent losses. Meanwhile, enhanced aircraft cleaning procedures will likely mean more time between flights, which combined with fewer passengers could badly dent their bottom lines.

"Cleaning up, safety procedures -- that will delay flights. And it will have some level of expenditures," said Jacques Roy, a professor of transport management at HEC Montreal business school.

"But the most important thing would be to remove the middle seat. That would reduce capacity by one-third. To compensate you have to increase prices."

Jim Scott, CEO of ultra-low-cost carrier Flair Airlines, acknowledged that higher fares are likely on the horizon, though not immediately as carriers try to encourage travellers with lower prices.

"If you want that middle seat empty, probably you're going to have to pay more," he said.

In North America, physical distancing on board would push the average fare up by 43 per cent to US$289 from US$202 in 2019 just for airlines to break even, according to the International Air Transport Association (IATA).

"Eliminating the middle seat will raise costs. If that can be offset that with higher fares, the era of affordable travel will come to an end," industry group director general Alexandre de Juniac said last month.

While some adjustments may be easier to adapt to -- ubiquitous disinfectant dispensers and plastic barriers in terminals, for example -- others may be a little more difficult to accept.

Budget carrier Ryanair will require customers to make a special request to use the washroom to avoid what IATA calls a "congregation of passengers" in the cabin.

Nonetheless, the trade group, which counts Air Canada and WestJet among its almost 300 members, raised eyebrows last month when it announced that passenger face coverings have eliminated the need for physical distancing on board -- washroom queues aside -- and that aircraft seats serve as a barrier to viral transmission.

Airlines may be under pressure to make middle seats available soon as passenger volumes, which have fallen by more than 95 per cent year over year at Canadian carriers, start to rise again. WestJet said in an email it will reassess its no-middle-seat policy at the end of the month, while an Air Canada spokesman said that "it is not possible to speculate on the future possibilities."

For now, most regulators have not acted on IATA's push for middle seat occupancy, and airlines may find they need to entice passengers with rigorous health and hygiene protocols rather than filling each flight to capacity, said Dr. Paul Pottinger, professor of infectious diseases at the University of Washington's School of Medicine.

"The question, I think, is not one of viruses and infection, it's one of economics. Is that risk reduction small enough that people would be willing to pay a price in terms of the premium on their ticket?" he asked.

Ultimately, vigilance in physical distancing and sanitization are critical to containing coronavirus spread, no matter how it alters Canadians' flying experience, Pottinger said.

"It is a layer of protection that I envision for all of us regardless of whether you are squeezed into an aluminum tube or walking down the street. The virus doesn't care," he said.

"We just need to give each other a little more personal space. Doing it at the airport and on board? It's a real challenge."

This report by The Canadian Press was first published June 14, 2020.