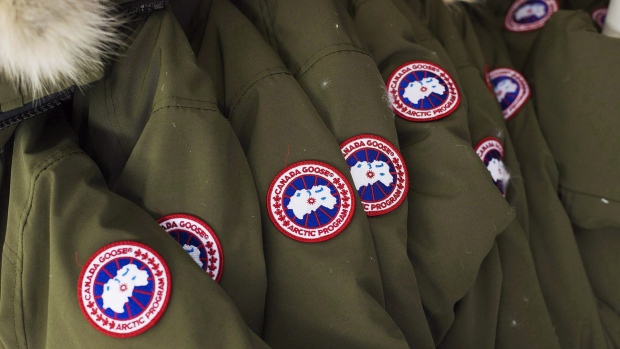 Jackets hang at the factory of Canada Goose Inc. in Toronto on November 28, 2013. THE CANADIAN PRESS/Aaron Vincent Elkaim

Canada Goose Holdings Inc., the luxury parka maker known for its coyote fur-trimmed hoods, will stop using fur in its products by the end of next year, the company said Thursday.

The decision came as upscale department store chain Holt Renfrew said it will stop selling all animal fur and exotic skins within the same timeframe.

The removal of fur from fashion collections and store shelves signals a changing tide in the apparel industry as consumer concerns over animal welfare increase, industry experts say.

“It's the right thing to do,” said retail analyst Bruce Winder.

“Frankly, I was pretty surprised that they still had fur in their products because if you look at what's happened in the U.S., there were a number of retailers and brands that took fur out of their stores quite a while ago, so there was a bit of a lag here in Canada compared to the U.S.”

Ending the use of fur also allows brands and retailers to appeal to more consumers, said Farla Efros, president of HRC Retail Advisory.

“When it comes to brand growth, it's more about the younger generation, and there are so many more vegans in the world,” she said. “This is really a great example of brand evolution for Canada Goose.”

Efros added: “This was kind of the last piece that they really needed to focus in on and clean up in order to truly appeal to a much larger demographic.”

The luxury parka maker has been using wild coyote fur from Western Canada and the U.S.

Canada Goose CEO Dani Reiss said the decision will transform how the company makes its products.

“Our focus has always been on making products that deliver exceptional quality, protection from the elements, and perform the way consumers need them to,” he said in a statement, adding that the company is now also “accelerating the sustainable evolution of our designs.”

The change comes after the company said last year that it would start using reclaimed fur and stop purchasing new fur in 2022.

Canada Goose has faced criticism from some animal rights groups for its use of fur.

In response to the company's decision to go fur free by the end of 2022, PETA president Ingrid Newkirk said the animal rights group is suspending its international campaigns against Canada Goose.

PETA will now push the company to end its use of goose and duck feathers, she said.

Meanwhile, Holts said it plans to stop selling cosmetic products that contain plastic glitter and made a commitment that its denim will comeâ€¯ from certified sustainable sources by the endâ€¯of 2025

It also said materials across its business such as cotton, leather, down and feathers and plastic packaging will come from certified sustainable sources by the end of 2025.

The sustainability plan included targets for greenhouse gas emission reductions from its operations.

The commitments by Holts and Canada Goose will set the agenda for other retailers and brands in Canada, Winder said,

“These folks are leaders, so it will set the tone for the entire market.”

- With files from Craig Wong