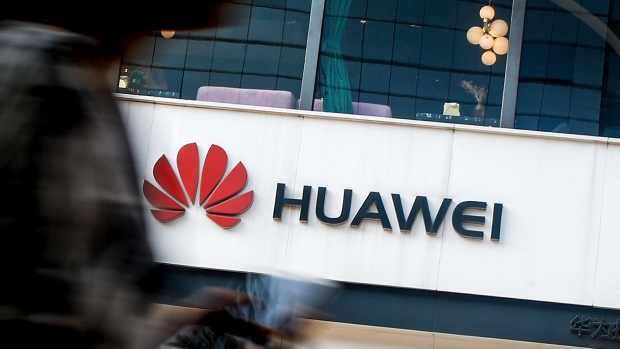 A woman walks by a Huawei retail store in Beijing, Tuesday, July 30, 2019. Huawei's global sales rose by double digits in the first half of this year despite being placed on a U.S. security blacklist. The Chinese tech giant's chairman said Washington's campaign against the company has 'galvanized our people.'(AP Photo/Andy Wong)

VANCOUVER -- A new survey says Canadian public opinion is solidly against allowing Huawei as a supplier for the new generation of ultra-fast wireless networks that are being built by the country's telecommunications companies.

An Angus Reid online poll published Wednesday says 69 per cent of respondents were against the federal government allowing the Chinese telecom equipment maker from being involved in Canada's fifth-generation wireless networks.

“Canadians are relatively united in this view, with two-thirds of supporters of each major federal party saying that Canada should not allow Huawei to be involved in 5G network production,” the non-profit survey company said.

The November online survey of 1,499 respondents also found 77 per cent of respondents agreed or strongly agreed that Canada should prohibit Chinese investment in sensitive industries such as finance and telecommunications.

The poll comes as the United States continues long-standing efforts to convince its allies such as Canada to bar Huawei as a threat to national security because of the influence of the Chinese government.

The U.S. warns that China could require the company to gather sensitive information flowing through its equipment, an allegation that Huawei says is unproven and against the company's business interests.

Although Trump administration officials have warned repeatedly that inclusion of Huawei equipment in 5G networks could threaten its information sharing with allies, the Trudeau government has yet to announce a decision.

Canada's relationship with China has been strained since Huawei executive Meng Wanzhou, daughter of the company's founder, was arrested on Dec. 1, 2018 in Vancouver at the request of the United States. She remains under house arrest at one of her two Vancouver homes while fighting a court battle alleging an abuse of process.

Canadians Michael Kovrig and Michael Spavor, apparently arrested in retaliation for Meng's arrest, have been in custody in China for a year without seeing their families or a lawyer. On Tuesday, a Chinese foreign ministry spokeswoman said the cases have been sent “for investigation and prosecution” on national security allegations.

A commentary with the Angus Reid survey, conducted Nov. 16 to 20, said that Canadians have grown more frustrated with China but also more divided about the government's handling of the Meng saga.

It says 51 per cent of respondents in the latest poll said Canada should have resisted the U.S. request to arrest the Huawei executive, while 49 per cent said it made the right decision.

The survey also found that 66 per cent of respondents had a negative view of China, up from 51 per cent in 2018.

According to the polling industry's generally accepted standards, online surveys cannot be assigned a margin of error because they do not randomly sample the population.