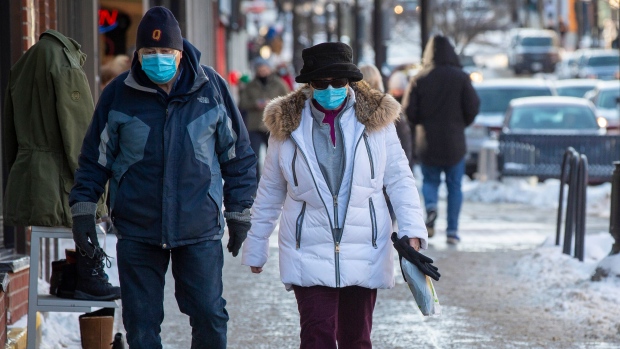 People wear masks to protect them from the COVID-19 virus in Kingston, Ontario, on Wednesday Feb. 10, 2021. THE CANADIAN PRESS/Lars Hagberg

More than six out of 10 Ontarians believe that COVID-19 restrictions were either lifted at the right time or too slowly but there is still strong levels of support for precautions like mandatory masking and testing prior to international travel, a new poll has found.

The Angus Reid Institute surveyed 2,550 Canadian adults about their thoughts on the lifting of public health measures and the performance of their provincial leaders as the country marks two years of living in a global pandemic.

But there was also significant support for the continuation of some public health measures, even as Ontario moves aggressively to lift all remaining restrictions by the end of April.

In fact, a total of 75 per cent of Ontarians and 73 per cent of Canadians said that they support wearing a mask in public indoor spaces.

Meanwhile, the poll found mixed support for voluntarily continuing with some precautions, even after restrictions are lifted.

Nationally, support for wearing a mask in public places was higher for those ages 55 and up (80 per cent) as well as those who live in urban areas (75 per cent).

There was also a gender divide with 79 per cent of women and only 67 per cent of men expressing support for wearing masks in indoor public settings.

As for the performance of Premier Doug Ford, a slight majority of respondents in Ontario said that he did either a bad job (31 per cent) or a very bad job (21 per cent) handling the pandemic over the last two years.

It should, however, be noted that Ford’s approval rating was higher than his counterparts in Alberta, Saskatchewan and Manitoba.

“More than two-in-five Ontarians (44 per cent) say Ontario Premier Doug Ford has done a good job on the COVID-19 file, but they are outnumbered by those who disagree. The government’s handling of schools has been a frequent source of criticism, as the province has closed them for in-person learning more often than anywhere in Canada. Ontarians also blamed Ford’s government for a ‘preventable’ third wave earlier in the pandemic. Still, Ford fares better than other premiers to the west,” a post on Angus Reid’s website states.

The Ford government has said that it plans to lift the mask mandate in most settings as of March 21 en route to removing all remaining restrictions by the end of April.

The poll was conducted via an online survey from March 1-4. It is considered accurate to within two percentage points, 19 times out of 20.