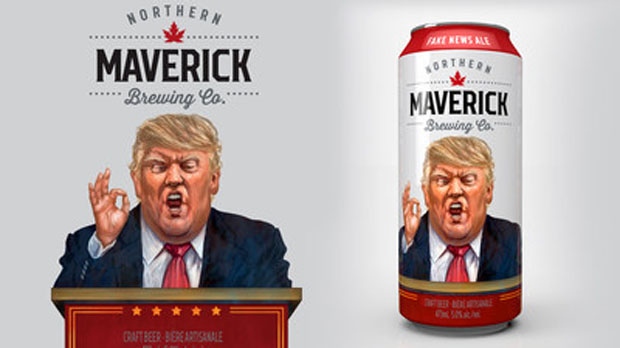 You can now drink your respite for the American political climate thanks to a Toronto craft brewery’s new session ale.

“This is sort of our way of speaking out,” said Jason Kaptyn, the brewery’s founder. “We chose Fake News Ale, parodying the American President because I think something for us is we grew up with news like CNN and the New York Times, so when they were being called ‘fake news,’ I think it sort of surprised us a little.”

Northern Maverick’s first beer, complete with a Trump-adorned caricature standing behind a podium on its label, lightheartedly mocks Trump’s administration, he told CP24.

Fake News Ale pokes fun at the political climate south of the border, marketing a beer, which they say will “pair well with small hands, striking comb overs, huge egos and all things Mexican.”

Kaptyn hopes the pale ale can “bring some humour in a time of political challenge.”

Despite the beer’s playful approach, the brewery says it is hardlined on how it plans to combat what it calls “questionable policy” decisions by U.S. President Donald Trump. It will donate five per cent of each sale to a charity of the city’s choice.

“We’ve committed at looking at causes that have been directly impacted by the administration,” Kaptyn explained.

He estimates between 20 and 25 per cent of the profits for this beer will be donated. While Kaptyn hasn’t decided on one specific charity, he says Northern Maverick will offer a list of charities to be voted on by the community in the next few weeks.

This beer is the first in a line of “charitable beers” that will be offered. The GTA-native hopes to roll out a new brew every six to 18 months.

“It was designed to make people laugh more than anything else, and make people contemplate the idea of fake news in general,” he said.