A homeless male living in a wooden shelter in an encampment east of downtown Toronto was killed when the makeshift structure he was in caught fire on Wednesday morning.

Toronto firefighters say they were called to an encampment in Orphans Green Park, near Adelaide Street East and Power Street in Toronto's Corktown neighbourhood, after 6 a.m. for a fire.

"Toronto Fire Services responded to the report of a fire, a very visible fire, at this location. Upon arrival, our crews were met with a fully involved structure fire," Deputy Fire Chief Jim Jessop said on Wednesday morning.

He noted that a small wooden structure had caught fire in the park.

"The fire was quickly extinguished, unfortunately once the fire was extinguished, our crews conducted their search inside and noted one deceased person," he told reporters at the scene on Wednesday morning. 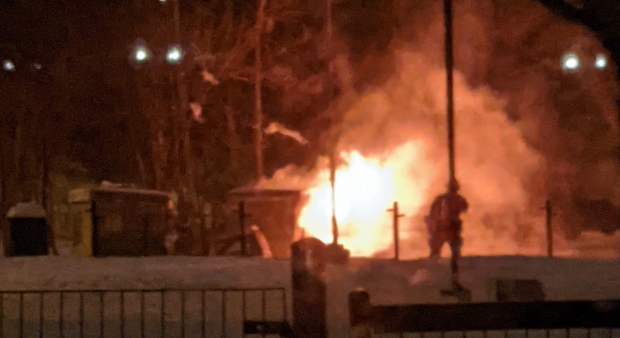 A construction worker told CP24 he watched fire crews spray the small structure, extinguish it, and then rush to rip it apart once they realized there was a person inside.

Police added that no one else was present at the encampment when emergency crews arrived.

The wooden structure that caught fire was coated both inside and out with some form of insulation.

Police have not released the name of the deceased. 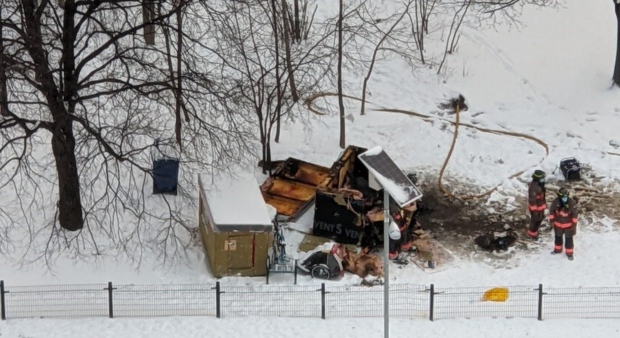 Fire officials said the Office of the Fire Marshal (OFM) has been called to the scene to investigate. Speaking to reporters on Wednesday, a spokesperson for the OFM said it is too early to say what caused the deadly blaze.

Area residents say the encampment has been at the dog park for most of the winter. Overnight, the wind chill was forecast to hit about -22.

He added the fatal fire marks the 27th fire crews have responded to at encampments in the city this year.

"I think Toronto Fire Services has been very clear... there are fire and life safety risks associated with these types of structures," he said Wednesday.

At a news conference Wednesday, Mayor John Tory expressed his condolences on the man’s death and said that increasing Toronto’s supply of affordable housing is one of the city’s highest priorities.

“We have thousands of affordable units in the pipeline, some under construction, some almost ready for occupancy, that we didn't have two years ago,” Tory said. “We have this as the top issue after the pandemic, I would say, in the entire city.”

Mary-Anne Bedard, the city's general manager of shelter, support and housing administration, said the city’s Streets to Homes teams were “out all night long” and that there were spaces in the shelter system.

“They had 73 interactions with people who were staying outside, and 10 of those people accepted assistance,” Bedard said.

She said city workers were at Orphan's Park around 2 a.m. to see if anyone wanted assistance, but they did not get a reply.

Critics of the city’s shelter system say that it is overcrowded and that numbers released by the city do not always properly reflect how difficult it can be to get a spot. Critics also say many people are afraid they might catch COVID-19 at the shelters, which have continued to see outbreaks despite infection-prevention measures.

Bedard said there is sometimes a delay between one person leaving a spot and that spot becoming available to someone else because city workers need time to sanitize the facility and register that a spot is available.